A well attended adult awards dinner was held at the club’s spacious bar and first floor function room on Friday 1st October, to celebrate and cogitate what was, in the end, a full season of Cricket.

A delightful Cricket tea was prepared by Canape Reds catering, which was enjoyed by the players and officials who have missed out on this aspect of the game for the last two seasons. Much of the evening’s cogitating at the committee’s table was whether or not Cricket tea’s would be back for 2022, let’s hope so.

The awards kicked off with the Women’s team and Mags Lightbody, the club’s welfare officer and women’ 1st XI player, who stood in on the night for Captain Sarah Sanderson to provide a summary of the season. The Women’s team has gone from strength to strength over recent years, which has been accelerated by the successful introduction of several girls who have developed at the club or joined from other clubs this season. Ava Gabrielle, Emily Neighbour, Zara Wyatt & Grace Czakan, who made their debut and played their first open age group league matches in the HCWPL, were presented with club caps which were accepted by Grace who was there on the night. This uprising of energy and youth that has been guided by experience and organisation, along with the up and coming All Stars and Dynamos, will inevitably fulfil the club’s aspirations to set up a girls team in the near future. Congratulations to Megs Woodward on winning the batting award, and Zara Wyatt on taking home the bowling award – both collected by Vicky Shaw on their behalf.

Next up was the 4th XI, led by Ed Mather, who also celebrated the successful development of junior players, many of which are Oxfordshire County pathway players which is great for the club and for our Championship winning County. The Batting & Bowling honours were picked up by two more of the club’s County players, Charlie Anderson and Trevor Spindler who are also on the Oxfordshire player pathway albeit at a different junction. Thanks and well done to Ed and Tim, for managing the availability and selection of the 4th XI in a way in which provides as many people as possible with an opportunity to play open age league Cricket, but most importantly providing an opportunity for the juniors.

Vim Desai, who has led the 3rd XI for 5 years and will be standing down at the end of this season, talked us through the various ups and downs of his campaign noting the improvement of the wicket and ground at LWS, which has also been acknowledged by the Cherwell League. Our thanks go out to Sue Benson and LWS for their continued effort and investment in the ground, without which we would not be able to offer the opportunities to play cricket for so many in Thame and surrounding area. And thanks to Vim for his Captaincy of the team, which has been instrumental in the development of the club and building on the partnership with LWS. P.S. well done for getting promoted too (subject to Cherwell league approval) Batting and bowling awards went to Justin Avery and Ian McStay.

Ollie Sutcliffe, the leader of the 2nd XI rabble wasn’t available on the night, and at short notice Matt Furness stepped up and delivered an articulate account of their season, during which they narrowly missed out on promotion to Division 2 of the Cherwell League on the last day of the season. Matt himself won the batting award, while Greg Jenkins collected the bowling award.

And Mike Beard, who has led the 1st XI for 5 years and will be standing down at the end of this season, talked us through what would have been the Greatest Escape in the club’s history, which unfortunately was not to be. I’m sure they will come back next season stronger and raring to go. Thanks to Mike for his leadership of the team and congratulations on your recent marriage to the lovely Hannah, Mike said “I’m really very lucky to have met Hannah and asked her to marry me and for her to have said yes is amazing….love it. I’m available for 18 matches next season no probs.” The batting award went to Callum Russell and Bowling to Kelvin Burrows.

Ian McStay presented the John Fulkes award to the standout winner Luke Hayes, who has had another fantastic season and is a really exciting prospect for the club and County. We also recognised the Junior boys who made a debut in the adult league this season with Josh Towell, Alex Tervet, Zac Harris, Ishaan Barde & Max Shayler.

Club Champion award went to Stephen Beard for his 25 years as treasurer and his outstanding contribution to the club as a volunteer for so many years – we’re not exactly sure how he does it but the club’s finances remain in a solid position. Special mention went to Tim Dabbs, our very own ‘Mr Cricket’ who quietly gets on with numerous jobs helping and leading the 4th XI, Saxons and Women’s team, he is a fantastic asset to the club, thank you Tim.

And a special mention was also made for Andy Jinman, who recently migrated south to take on his new role as Grandpa. Andy was instrumental in the development of the club in recent years and a framed photograph of his last match at Church Meadow in 2019 was presented in thanks for all his hard work.

And finally, a note from me, after 9 years on the committee I will be standing down at the end of the season and officially at the AGM in February. I appreciate the duration of my tenure seems short in comparison to others but it’s not the years it’s the mileage! It has been an amazing experience to help develop the club alongside an excellent group of people, we should all be very proud of what has been achieved and look forward to continued success. I will continue to help coach the junior section for as long as Clément wants to play, which will offer me a new challenge and I will also enjoy spending more time with family. 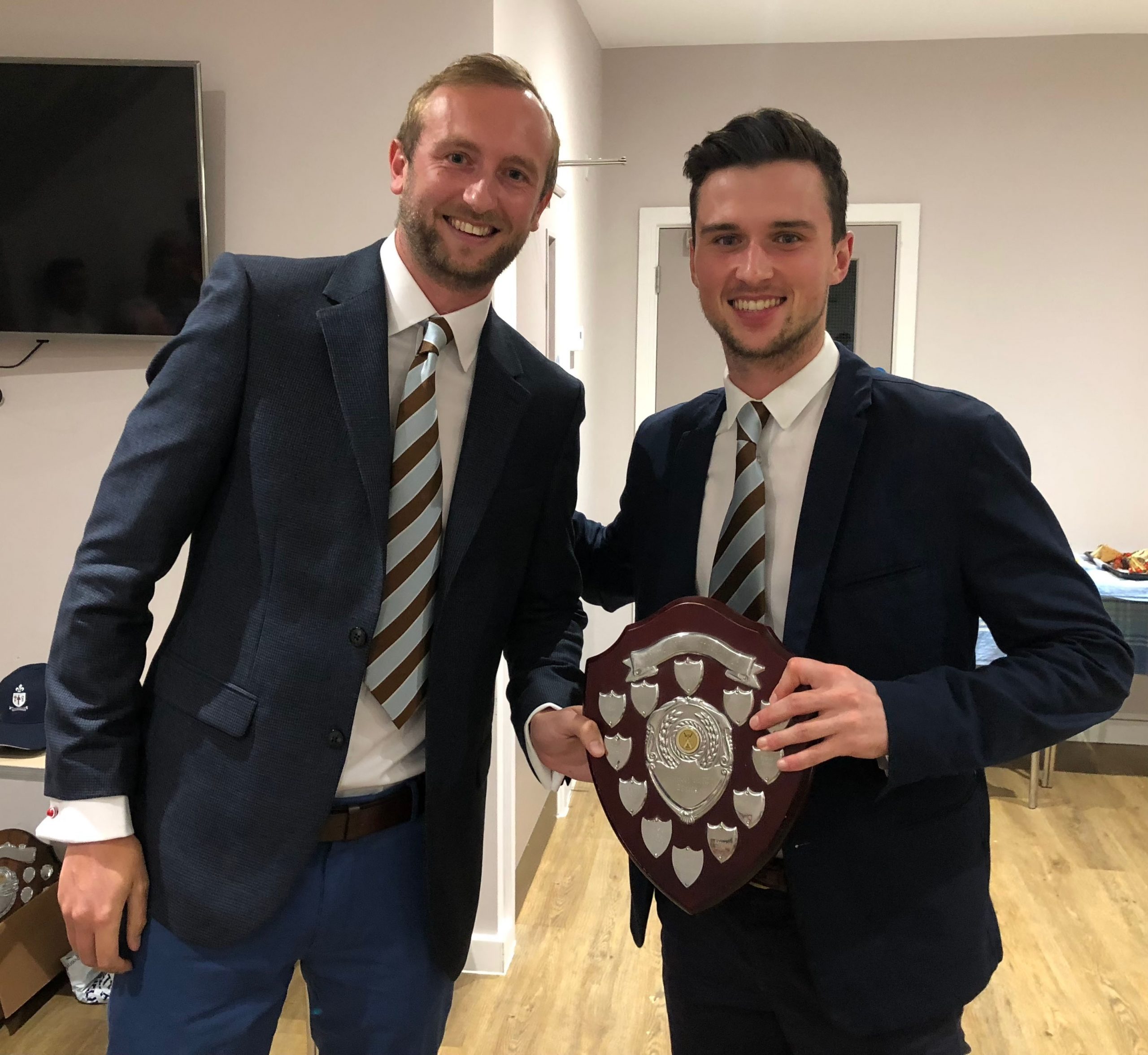 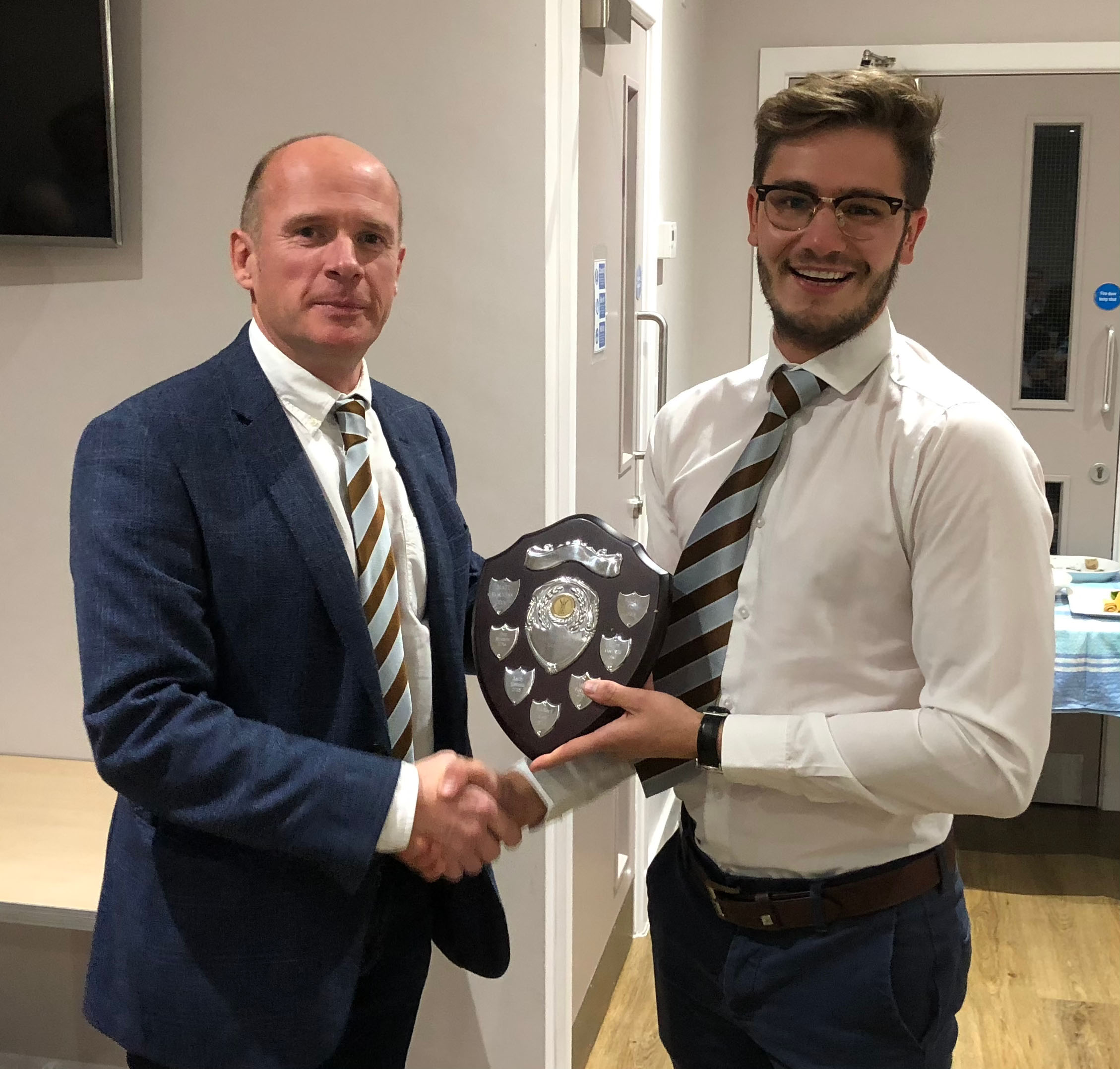 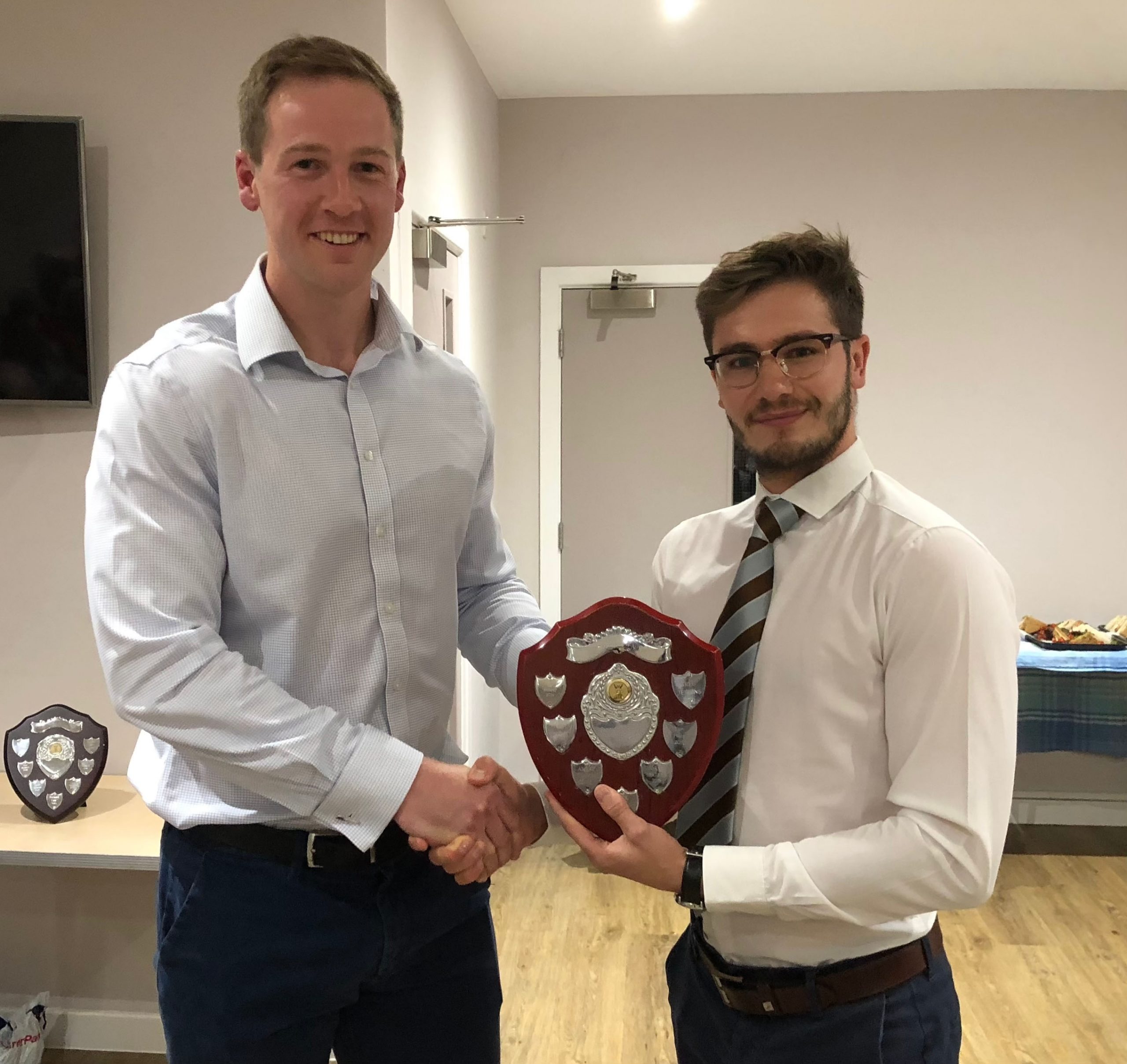 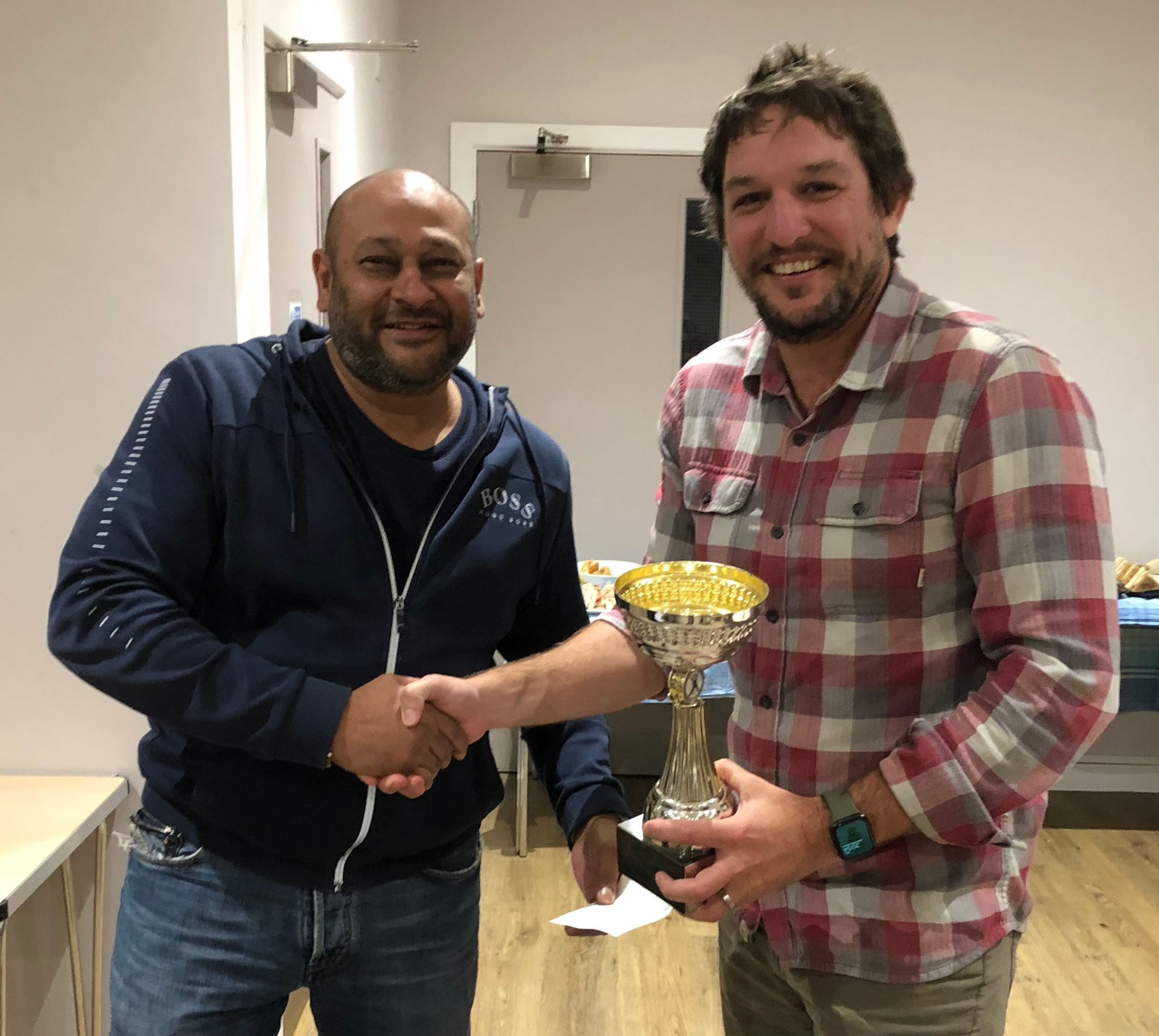 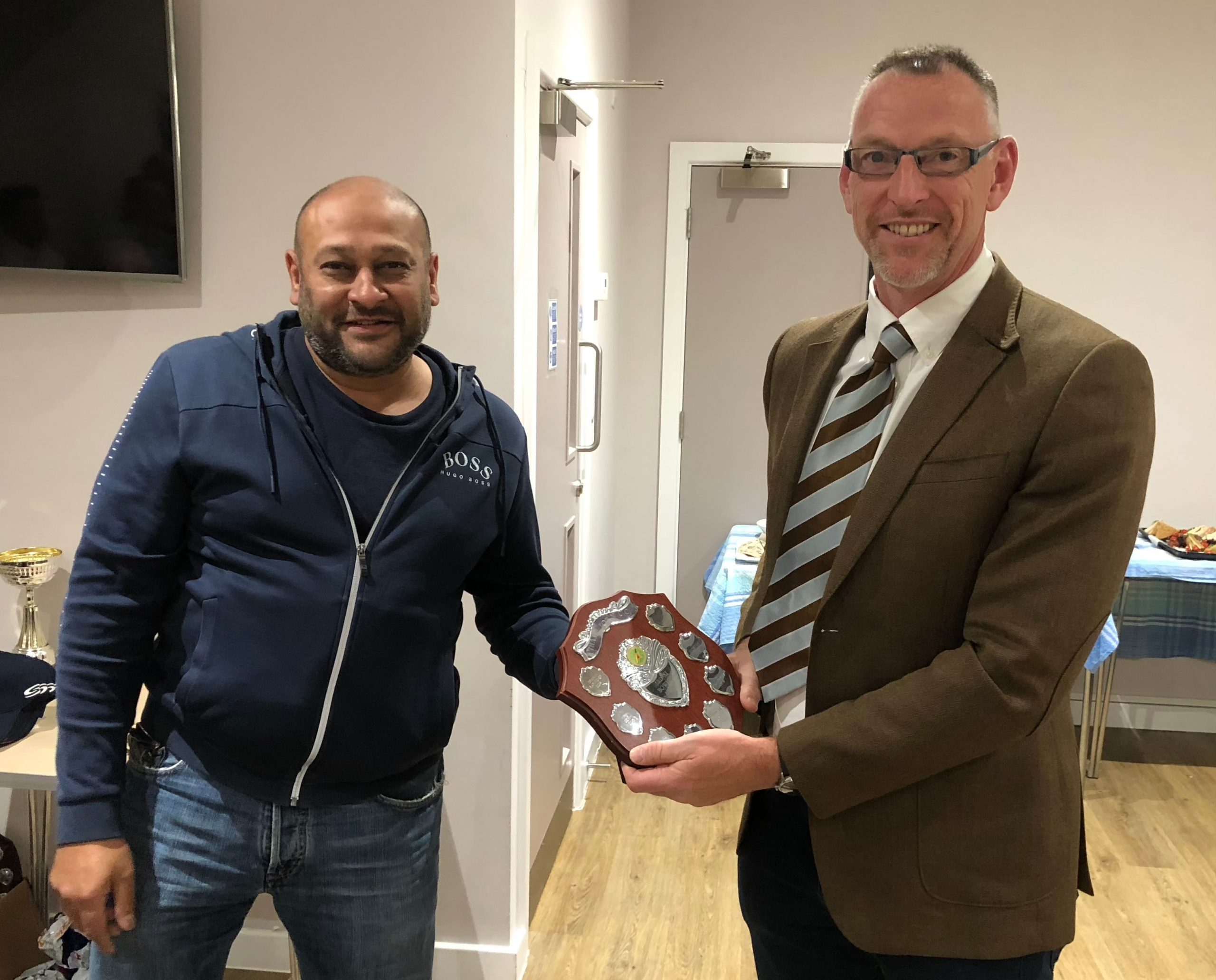 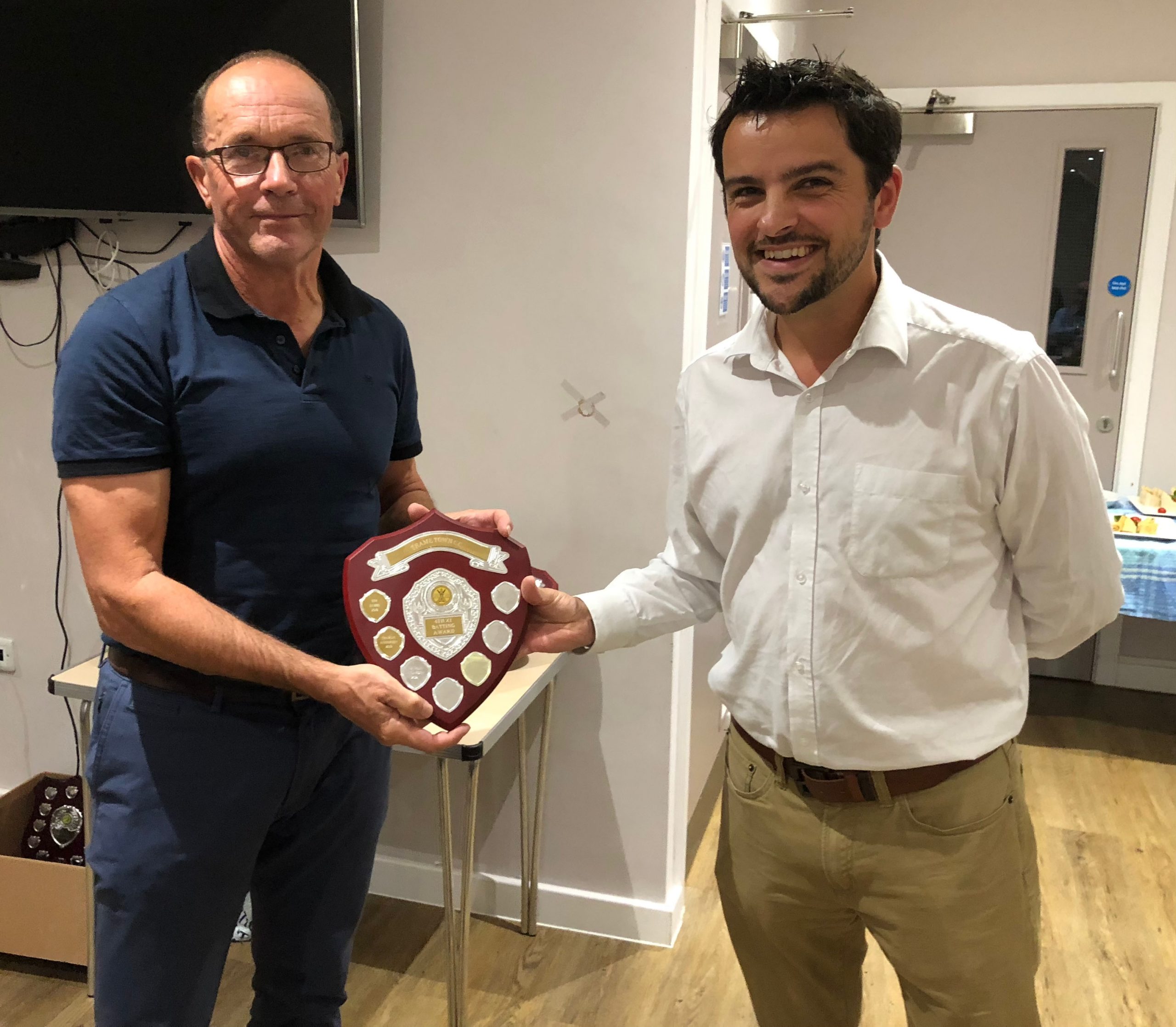 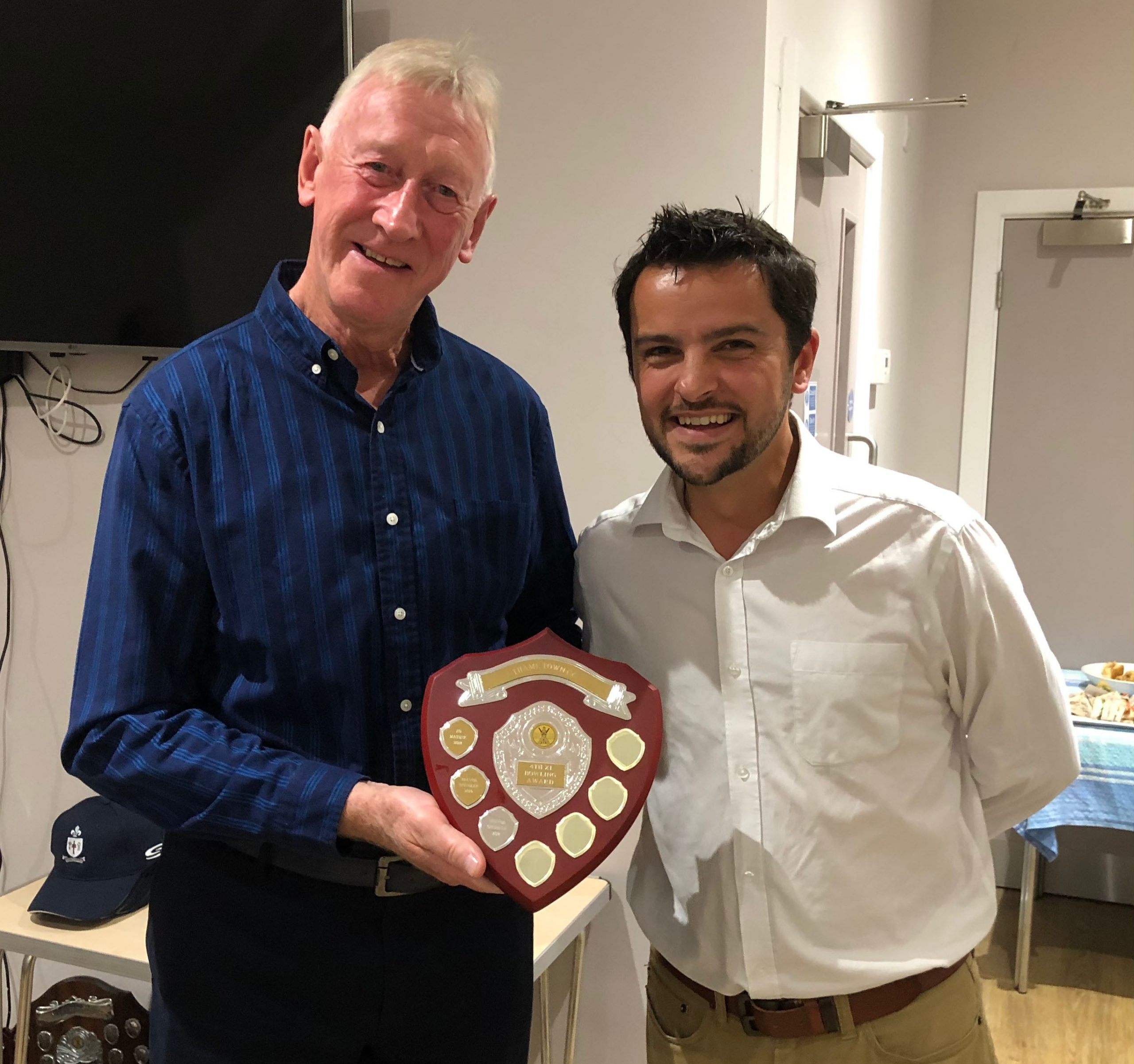 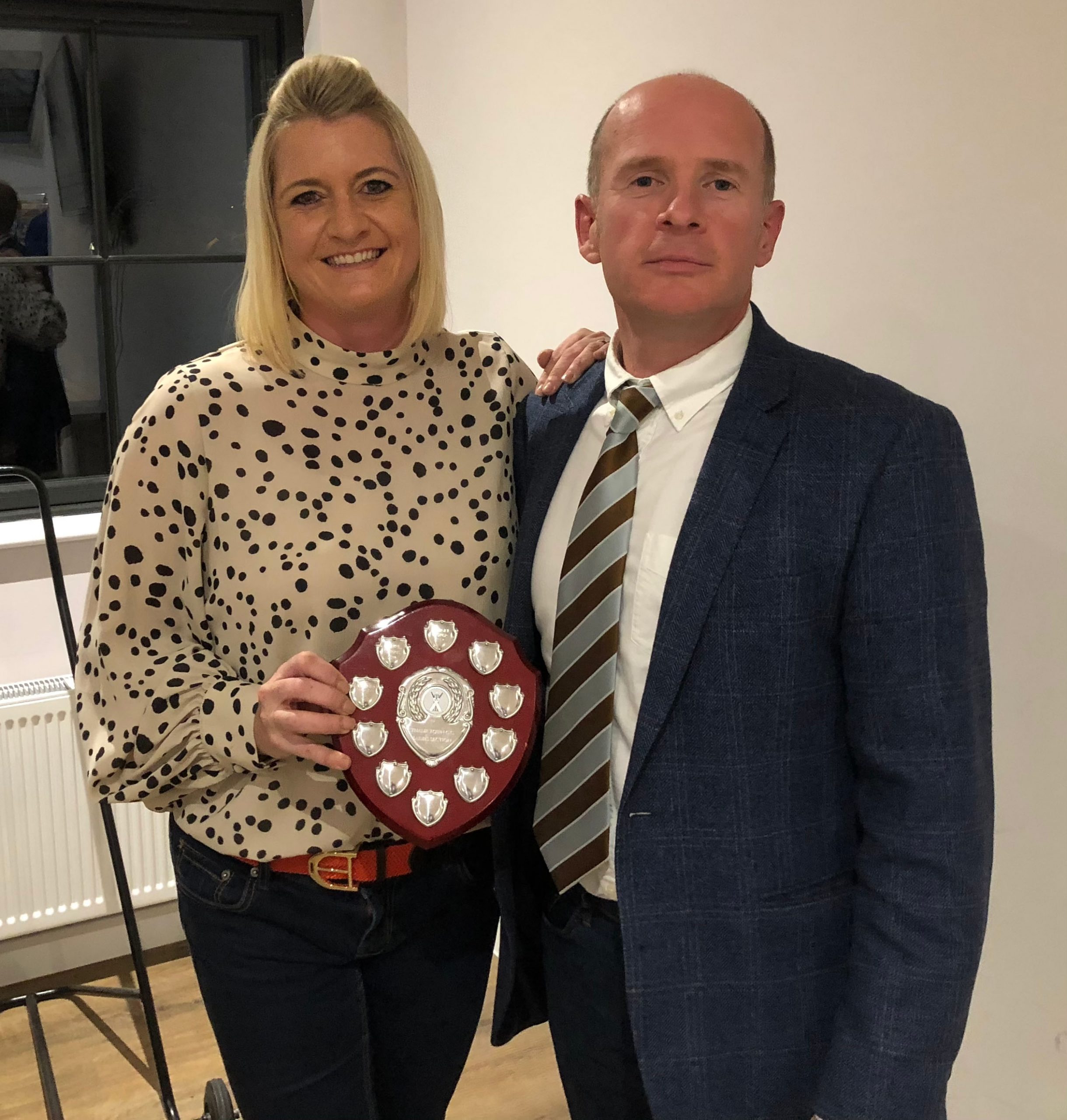 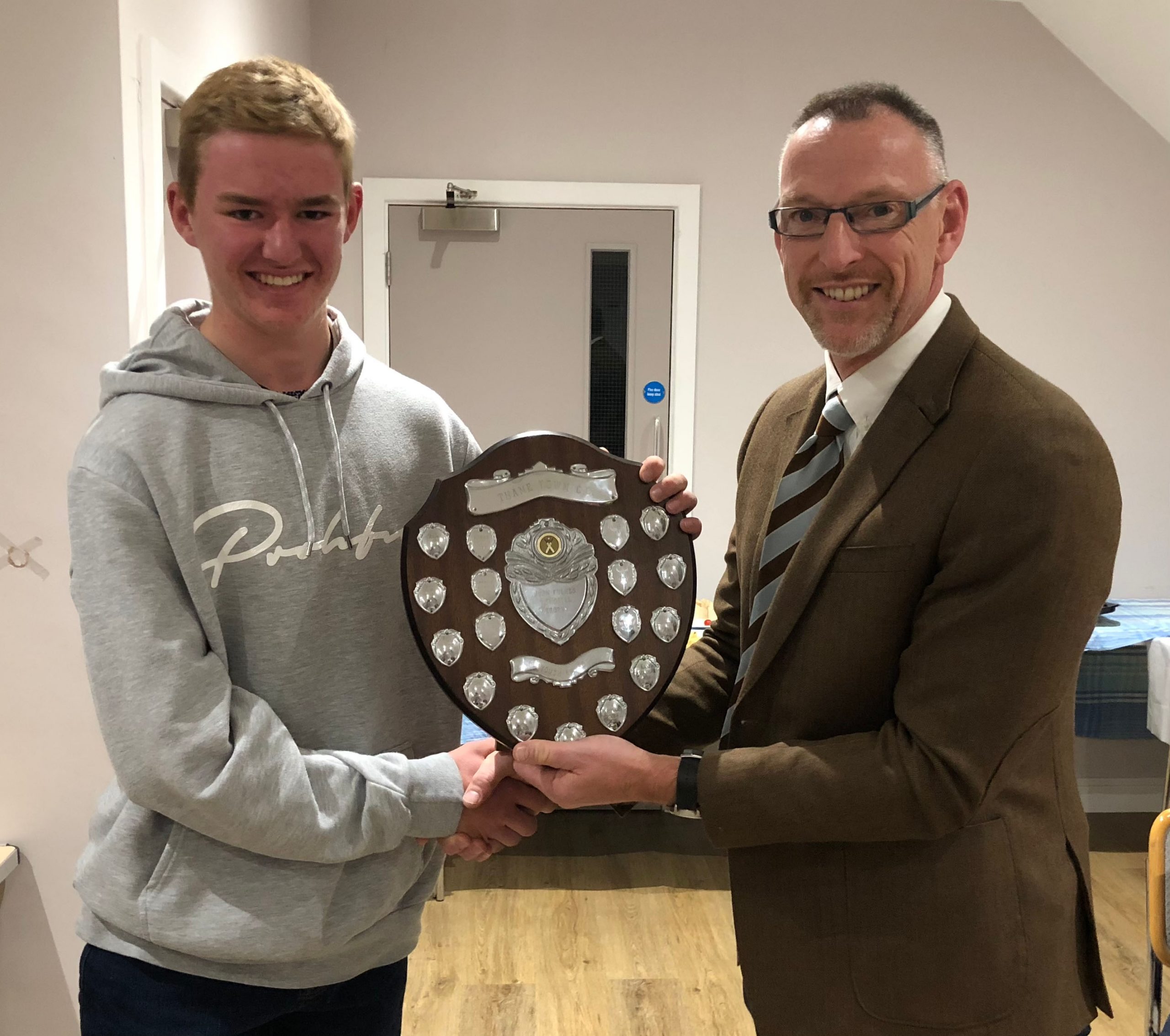 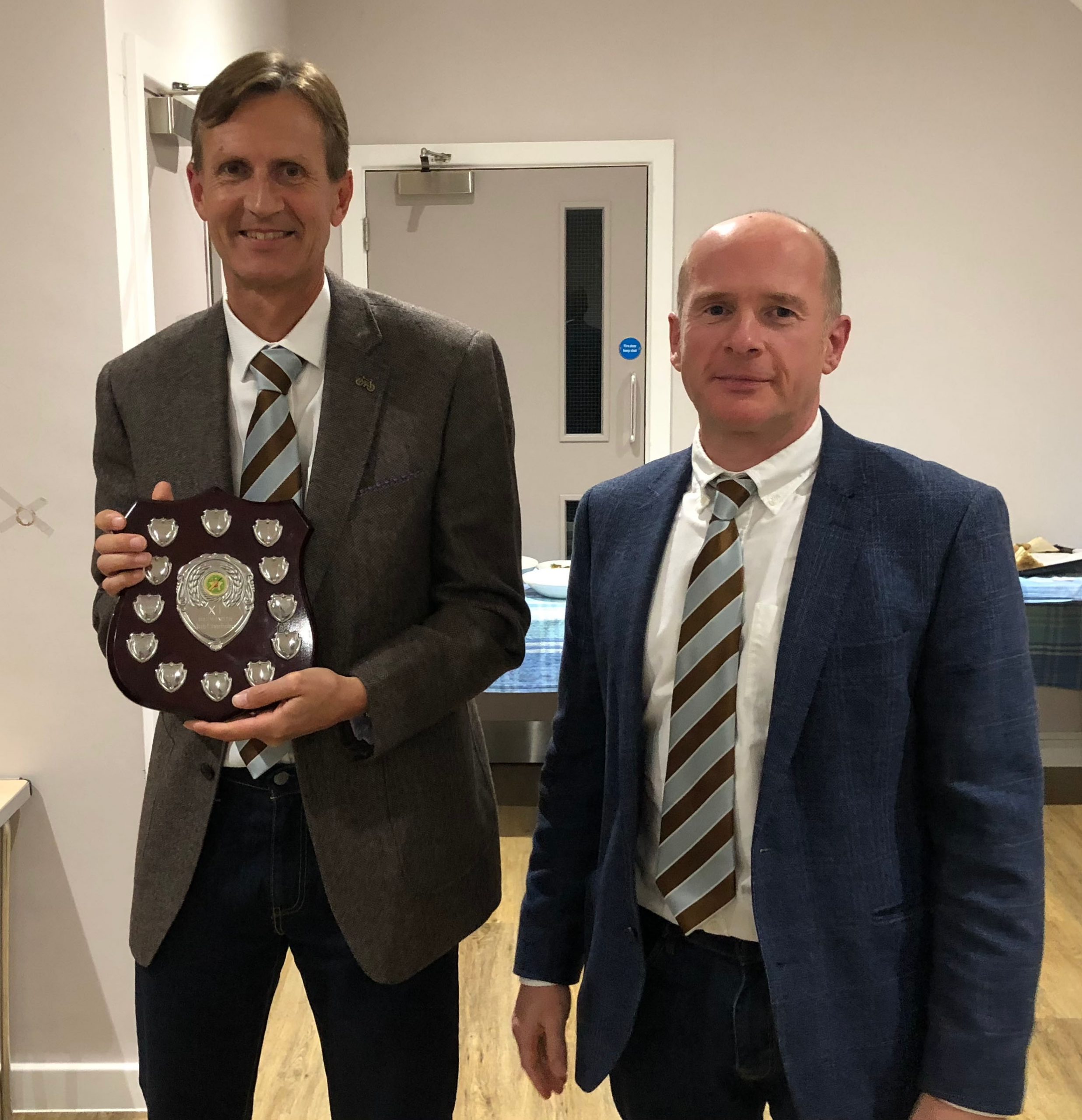 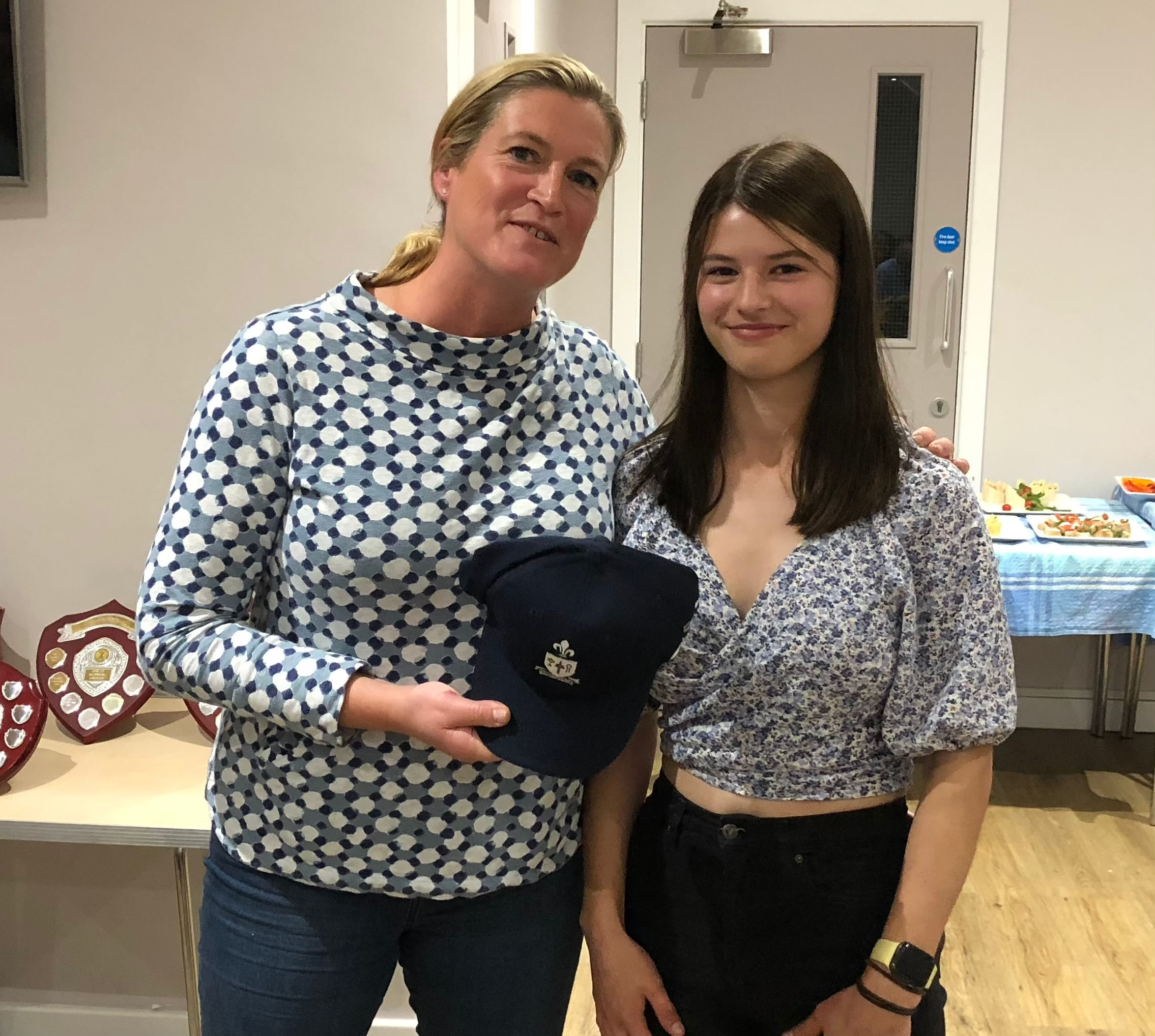 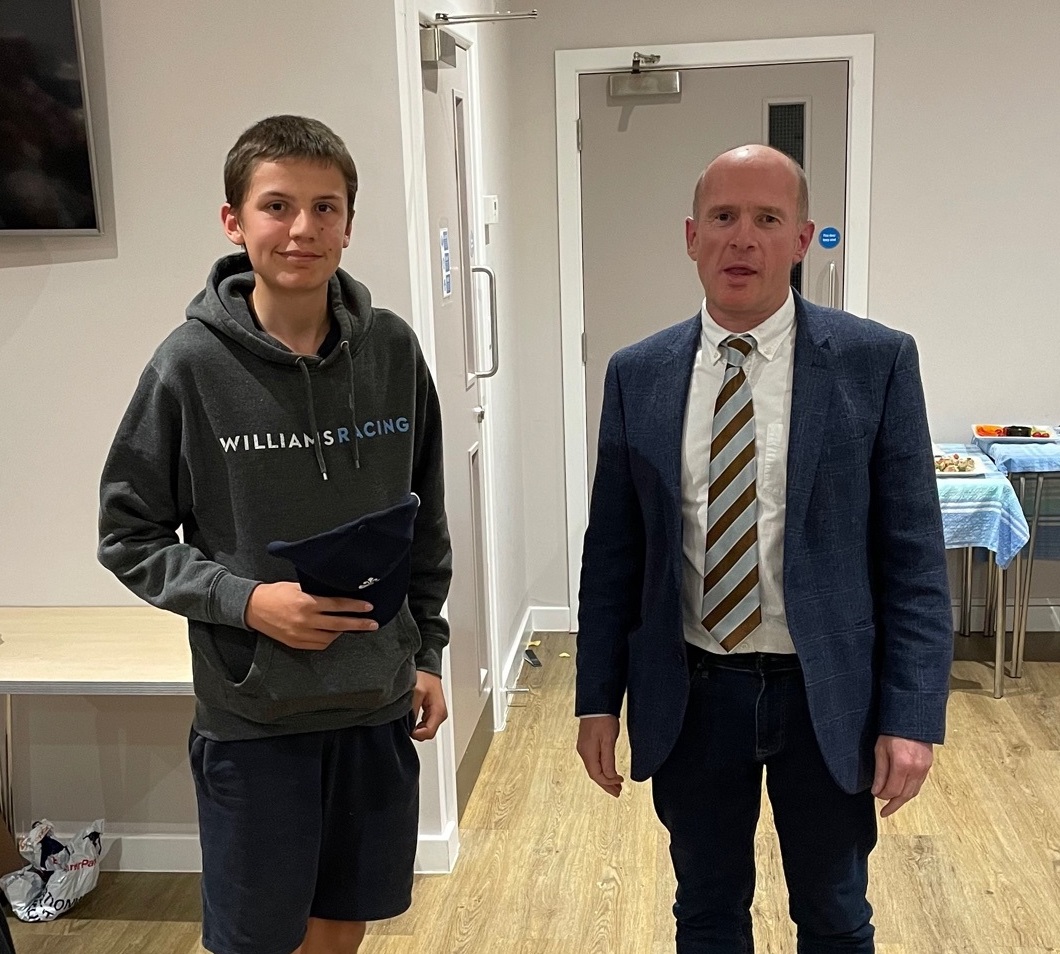 Josh Towell was presented with his TTCC Cap by Matt Swain, after making his Senior Team Debut this season 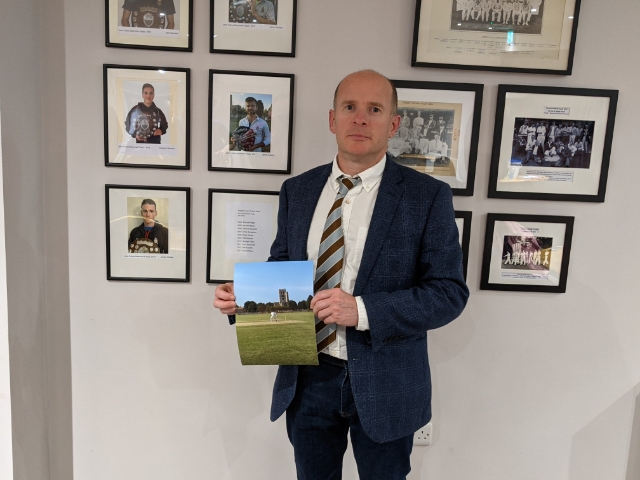 Matt Swain with a photo of Andy Jinman, to be sent to Andy as a gift for all that he did for the club while living in the area