With the start delayed due a puddle on a length, Thame won the toss and chose to bowl first on a wicket that would prove to be a nightmare for both sets of batsman. Wickets were shared around, and Thame put in a superb fielding display, as Chesham were bowled out for 101.

The chase was never likely to be simple however, on a wicket offering extreme variations in bounce and extravagant turn. This was to become further apparent as Thame slipped to 4-2 in the first over. Hassam Mushtaq was the only batsman to come to grips with the conditions, making a gritty 37, but he was the last man to fall as Thame were bundled out for 82.

Unbeaten run comes to an end for 2nd XI

The 2nd XI welcomed Oxford to Church Meadow. Losing the toss and bowling first, Thame got off to a strong start thanks to tight bowling from openers Chris Jeffcock (2-21) and Liam Evans (1-29). Although Oxford soon got more momentum, wickets from Adam Phippen (2-38) and debutant Gareth Bridges (4-35) meant that Oxford could post a par total of 174.

In reply, Thame’s batsmen struggled due to strong bowling from Oxford, with no batsmen scoring above 30 runs. This left Thame being bowled out for only 122, meaning their first loss of the season.

Despite this loss, Thame are still top of the table and seek to extend their place next week away at Oxford and Bletchingdon Nondescripts.

The 3s travelled to Oxford & Bletchingdon Non-Descript 2’s on a dull and overcast day. Having lost the toss, Thame were inserted into bat and found run scoring opportunities difficult on a slow pitch with some unpredictable bounce. Despite a solid start from openers Andy Jinman and Paddy Harris, who put on a partnership of 42, Thame limped to a below par score of 136. Once again valuable late order contributions from Ian McStay (19) and Pete Tervet (13) helped gain a few batting points.

In reply, OBNDs found the wicket more helpful as the clouds disappeared and the sun dried the wicket out. The Thame opening bowlers toiled without reward but both 1st change bowlers Luke Hayes (1-6) and Ian McStay (3-10, pictured below) made the opposition work hard with some miserly and accurate bowling. Taylor Vines also managed a debut wicket with some fine spin bowling. Alas the target was easily reached inside 35 overs but despite the defeat there was cause for some hearty celebrations for Thame CC, as Ian McStay joined the exclusive Cherwell League 500 wicket club.

Thame 3s next take on Bletchley Town 2 at home.

Thame 4s welcomed the visit of Didcot 4s on Saturday on a blustery afternoon at Lord Williams. Having lost the toss Thame were put into bat and subsequently made a positive start. Early top order partnership between Charlie Anderson (31) and Andy Johnson (54) helped Thame to a respectful 147-8 off their 45 overs.

In the field, Thame soon made early headway with Chris Penny (pictured below) striking early taking 2 wickets in the first over. Penny eventually posting figures of 5-16 off 10 overs. Didcot responded through its stubborn lower order to take the game to within 4 runs of victory for the visitors before Thame finally taking the 10th wicket to claim a dramatic win in the 41st over. 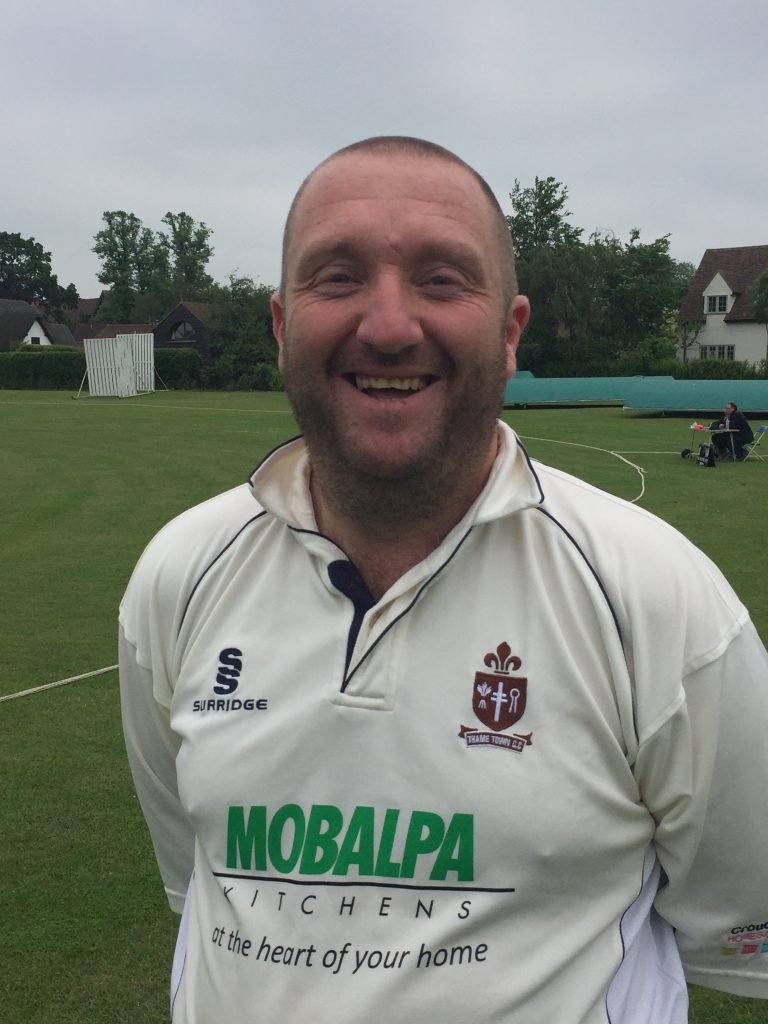