Winning the toss and batting first, Thame once again made a poor start, but captain Mike Beard (28) and overseas Gamindu Kanishka (36) rebuilt the innings to 80-2. The fall of both in the same over to Slough skipper Bobby Sher turned the game and, despite Thame’s lower order again showing their worth, Thame stuttered to a below par 175-9.

The Slough response got off to a good start, and the game looked over at 100 without loss. However, Thame showed the same character that saw them gain promotion in the previous season, with wickets falling dramatically in the later stages – Kanishka leading the way with 2-20. Slough eventually scrambling home for the loss of 7 wickets with just 10 balls to spare.

Thame travel to Tring next weekend.

Thame 2nd XI travelled to play Charlbury 1st XI, hoping to extend their 100% win rate. Despite losing the toss and getting stuck in to bat, James Nielson (67, pictured below) and debutant Rafe Dickie (52) put on over 100 runs for the first wicket partnership. This was then built upon by quick runs by Daniel Patey (26), Jack Aston (48) and Richard Carr (27*), leaving Thame on an impressive 275 from their 50 overs.

In response, Charlbury never looked like they could surmount Thame’s big total thanks to early wickets by Matt Ridgway (2-35) and Jonathan Jelfs (3-18). The introduction of Daniel Patey (3-21) and Alastair Thomas (1-9) then kept Thame well on top, dismissing Charlbury for only 83 runs and securing an easy win for Thame.

The 2nd XI welcome 2nd placed East Oxford to the Meadow next week.

Thame, playing at home, won the toss and invited Oxford 4s to bat first. The visitors soon struggled on a difficult track as bowlers, Nick Humphries (2-14, including a sharp catch by Andy Jinman at slip) and Pete Tervet (0-19 off 13 miserly overs) ensured that Oxford were restricted to 33 for 2 off 22 overs, at drinks. The steady James Oates (36) and the attacking Ishaan Roy (29) helped Oxford reach 99 for 7 off 45 overs. Wickets one a piece, were shared by Rob Tomlin, Luke Hayes, Ian McStay and Vim Desai – who gained revenge for a huge 6 on Ishaan by luring him to charge once more and getting stumped by Christian Warwick.

In reply, and chasing 100 for victory, the Thame 3s innings started disastrously as they slumped to 5 for 5. Some sharp catches and tidy bowling from Todd and Oates causing the damage. It was left to Chris Penny (16) to start a fight-back, followed by a defiant ninth wicket partnership of 59 between Ian McStay (30) and Pete Tervet (30*, pictured below) to bring the score to 81-9. The dogged Pete and maturing Rob Tomlin edged Thame over the line, with Rob hitting the winning runs and helping Thame to secure 3rd spot.

Thame next take on 5th place Kimble 2s away. 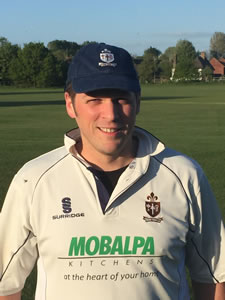 4s give it a good go after poor batting performance

The 4ths travelled to Bicester & North Oxford, yet to lose since forming this year. Thame lost the toss, and were put into bat. The innings started terribly, with both openers gone for ducks – 2 of 5 eventual ducks in the innings. Only Shay Reading (26) reached double figures, as some decent bowling and questionable batting got Thame up to 50 all out off of just 22 overs.

Facing an unlikely chance of victory, Thame had nothing to lose, and set about at least picking up bonus points for wickets. Ed Mather (2-25) removed the openers, and then with the game almost over, Rob Kenny (3-21) and a run out put the Bicester lower order on edge. But, the hosts slowly got over the line, as Thame picked up 6 wickets in a valiant effort.

The 4s face Aston Rowant 5 at home next week.