In one of the few games that didn’t succumb to the weather on Saturday, Thame 1st XI came unstuck against a strong Amersham side. Having won the toss and elected to bowl, Will Rooney (pictured right) made an early breakthrough via a stunning catch at slip by Will Sutcliffe to remove the dangerous Friderichs. However, Thame’s bowlers struggled for consistency in difficult conditions, coming off for rain on three occasions. Some strong late order hitting got Amersham up to 222-6 off their reduced 45 overs. Rooney, Adam Phippen and Andrew Russell took 2 wickets each.

The Thame reply never really got going. The loss of Sutcliffe, Kanishka and Beard early on to a well drilled Amersham bowling unit made the chase suddenly a distant hope. Resistance was found in the form of Hassam Mushtaq who ground out 27 to help Thame to a batting bonus point, as they were eventually bowled out for 119. 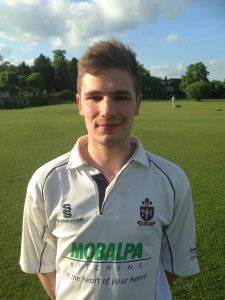 After starting their home game against Bletchley 1st XI late due to rain, Thame 2nd XI quickly stumbled to 15-2 until James Nielsen (34) and Guy Holmes (31) soon added some stability to the innings. Wickets in successive overs then left Thame in a tricky situation at 84-4. A half-century from Skipper Matt Furness (55, pictured right) helped to prevent a total collapse, steering Thame to a below-par 158.

During tea, rain began with no signs of potential improvement. Yet, no less than an hour and a half later, Bletchley went out to bat aggressively to reach the target within their remaining 23 overs. A wicket from Furness and a run out from Chris Penny limited Bletchley to 53-2 off 7.5 overs before more rain inevitably came to ruin either team’s chances of extra points.

3rds battle the weather to get extra bonus points in draw

A heavy downpour just before the start of the match made it difficult for Thame to prepare for their innings, having been put into bat by Cropredy 3rd XI. In testing conditions, Thame slumped to 65-7, with only Evan Davies (13) and Joe Phippen (12) reaching double figures. Amazingly, the rain stayed away, allowing a strong flurry from the tail through Nick Fuller (26) and Lewis Ludlam (16). Combined with a generous 40 extras, this got Thame to a better-than-it-could-have-been 132 all out.

An excellent Mrs Chappell tea prepared the boys for the pursuit of wickets before the likely rain, and an early one came thanks to a Pete Higson run out. Then the heavens opened, reducing the Cropredy innings to 28 overs.  From there, wickets meant points for Thame, and 4 more were delivered through Pete Tervet (1-12) and a blistering spell of 3-5 from George Patey (pictured below). The match unsurprisingly ended a draw, with Cropredy 39-5.

The 3rds face Tiddington away next week.