Signs of improvement but defeat for 1s

Thame 1st XI faced Tring at home on Saturday. After losing a couple of early wickets, Mike Beard (33) and Gami Kanishka (65, pictured below) laid a platform, but when both fell after lunch the lower order crumbled. Only Richie Straughan passed 20 as Thame reached 200 all out.

The Thame spin trio of Mike Higgs (1-34), Andy Russell (2-35) and Hassam Mushtaq (4-72) then demonstrated the quality that saw Thame promoted the previous year. All bowled with excellent control, and wickets were shared around as Tring were reduced to 150-7. However, a couple of chances went down and Tring overseas player, David Brent, saw his side home with a fine half century.

Thame travel to Banbury next weekend. 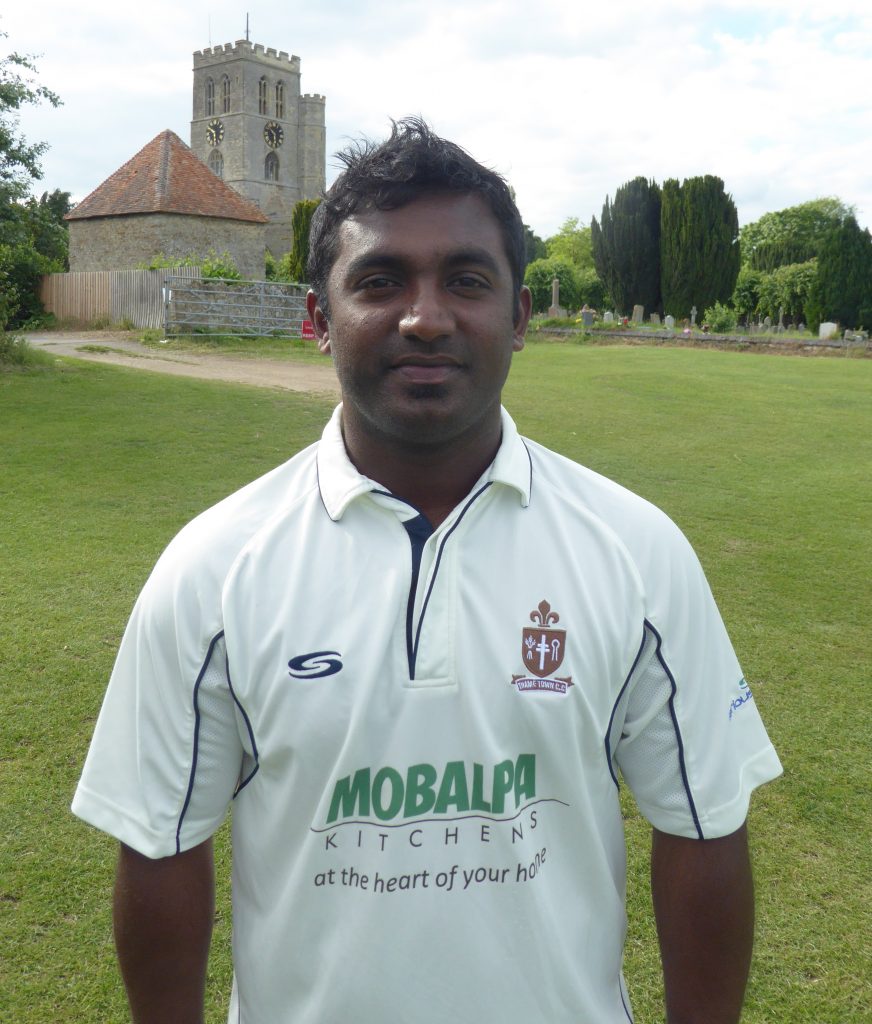 2s lose out in top-of-the-table clash

The 2nd XI faced a top of the table clash against East Oxford. Batting first, Thame got off to a steady start with runs coming from Christian Warwick (27) and skipper Matt Furness (39, pictured below). However, Thame’s middle order and tail struggled to face East Oxford’s strong bowling attack, leaving them on only 114 runs.

Thame quickly got back into the game, largely thanks to early wickets from promising youngster Jonathan Jelfs (3-40). Ultimately though, Thame’s total was not enough for the strong middle order of East Oxford, meaning that they could reach Thame’s total with 4 wickets in hand.

Despite this loss, the 2nd XI are going into their last four games sitting comfortably in the promotion slots, and face Shipton-under-Wychwood 2s at home next week. 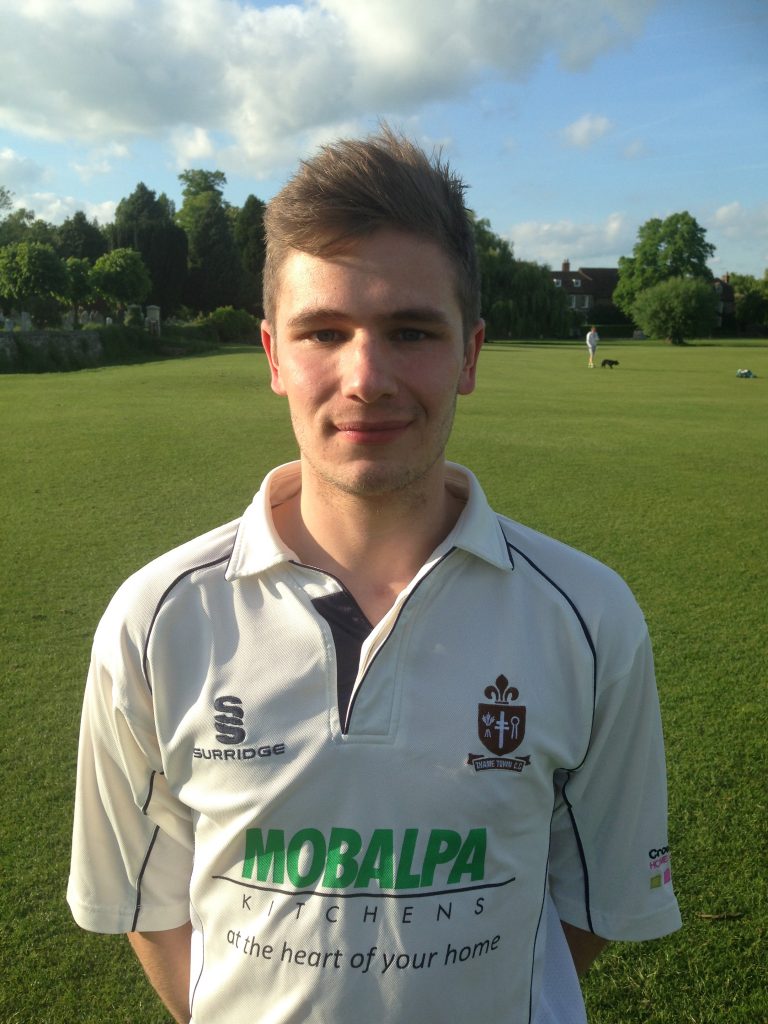 The 3s faced a strong Kimble 2nd XI on Saturday, at home. Winning the toss, on the back of large recent totals, Kimble elected to bat first. They would soon regret this decision as opening bowlers Will Bruce-Morgan (2-15) and Rob Tomlin (1-20) made inroads and put early pressure on the in-form batsmen. At 36-3 off 14 overs, Kimble looked to attack but the Thame bowlers held their nerve, supported by much-improved fielding, including some sharp catching by wicket-keeper Paddy Harris (3), Will B-M at short cover, Andy Jinman in the slips, plus Justin Avery and Ian McStay. The remainder of the wickets were shared by John Phippen (3-36), Vim Desai (3-17) and the ever-reliable Ian McStay (1-2), as Kimble were bowled out for a below-par score of 114 in 32 overs.

After an excellent tea – a Holmes-family affair – Thame went about knocking off the runs, led home at a gallop by the now-revived George Patey (40*) and top-scorer Justin Avery (55*, pictured below), who smashed a big six to finish the innings on 116-1, in just 20 overs. As a result of this convincing win, Thame stay 2nd in Division 9.

Next up are in-form Cumnor 3rds, this Saturday, again at home. 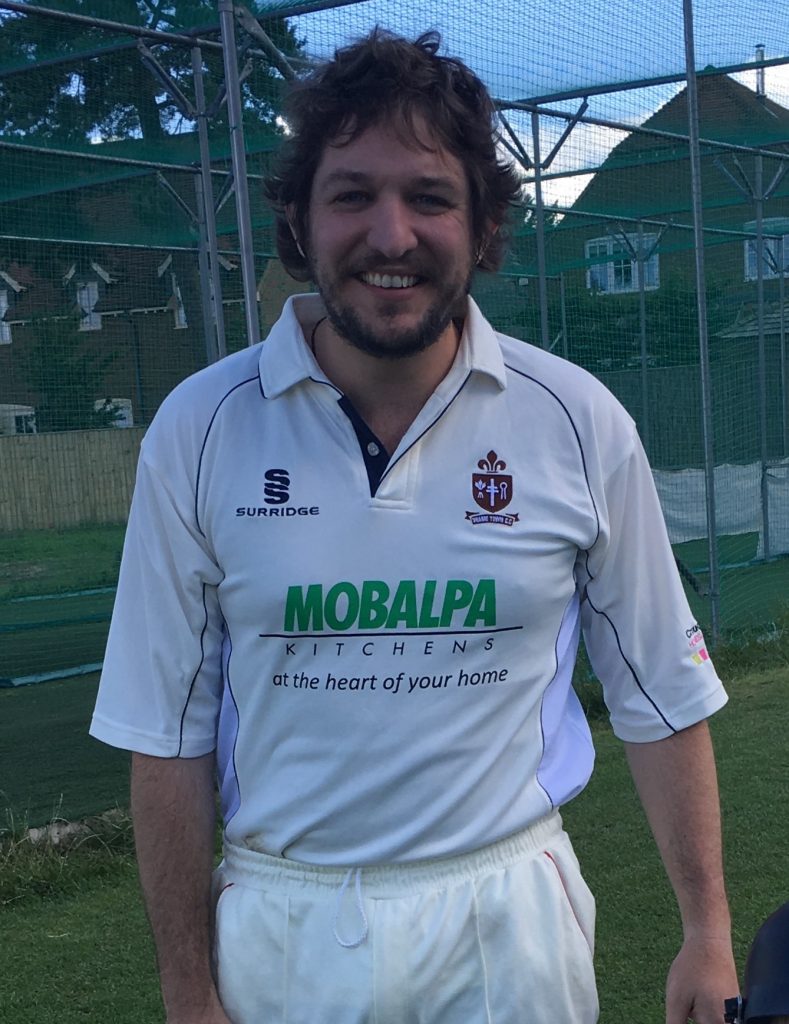 Thame travelled away for a challenging match against second-placed Cropredy, on another roasting hot Saturday. Winning the toss, Thame chose to bowl first, and after an early breakthrough to claim the wicket of Cropredy’s dangerous seasoned opener, Beercroft, spirits were high for a possible upset. However, Cropredy rallied behind their captain Hussain (56), and despite Mark Fellowes (2-27) and Neil Smith (2-51) continuing their excellent bowling form to dismiss more Cropredy batters, Cropredy’s talented youngster Noonan (105*) helped the opposition to set an imposing target of 261.

Fellowes (26) and Smith (29) made some good progress against a tricky cocktail of spin and swing bowlers, and Thame set about the chase in earnest. Rob Kenny (35*) batted superbly to earn some crucial batting points for Thame, before the team were eventually all out for 151. A tally of 10 bonus points against this dangerous team was a pleasing result; Thame being rewarded for their endless graft, and tight focus on a tricky, uneven outfield.

With an unfortunate cancellation against the Women’s team this week, a friendly against Wingrave was organised, with members of the 4th XI and Youth making up the numbers. After Wingrave reached 195-3 from their 35 overs, Thame went in to bat and put in a good team effort to reach 105 all out – Beth John (28) and Claire Morris (21) led the chase in vain. But, a good day all-round on a very hot afternoon. 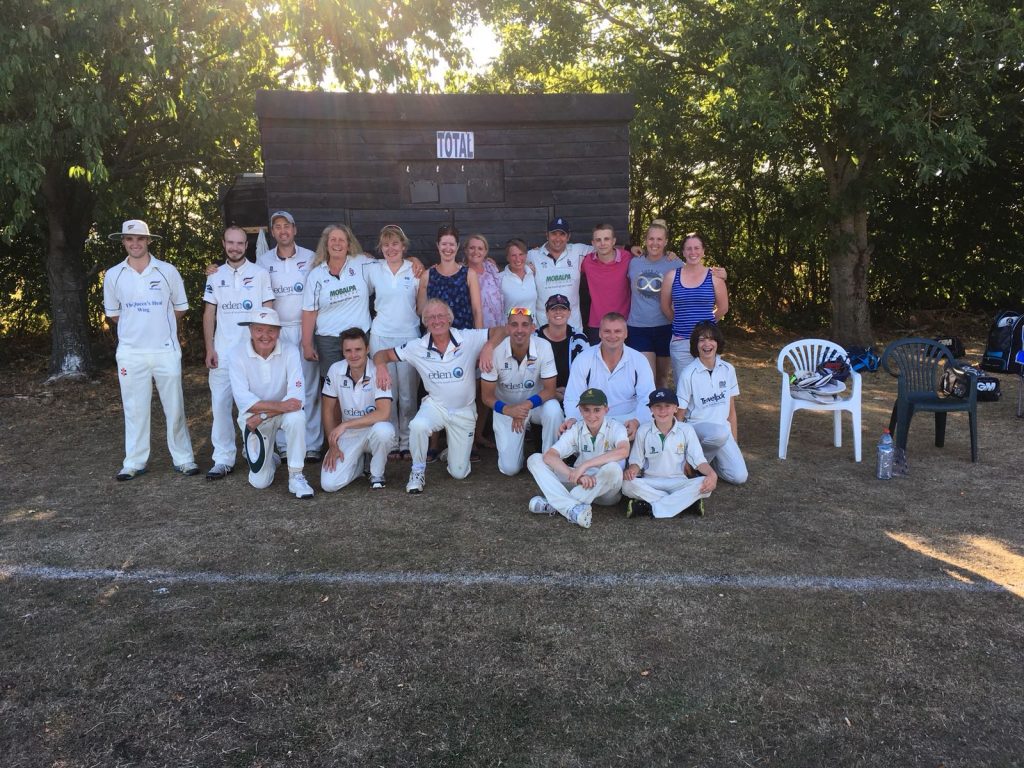