After the heatwave of the early week, the temperature cooled down in time for this week’s round of matches. Thame 1s hosted Horspath at Church Meadow, won the toss and bowled. Luke Hayes opened with a wicket maiden, before Skipper Hassam Mushtaq (4-51) and Faisal Ali (2-28) put Horspath in trouble at 78-7. However, the tail wagged and pushed the visitors up to 166 all out. Thame’s batters also struggled to get going. Mushtaq struck 28, batting mostly with the tail, but needing only 9 wickets due to an injury, Horspath bowled Thame out 25 runs short. Horspath leapfrog Thame into 6th, and the Meadowmen travel to 8th-placed Great Brickhill next week.

A strong 2s lineup travelled to Oxenford, won the toss and bowled. Ben Warwick returned to action and took out the top 3 on his way to a superb 6-18. Oxenford limped to 112 all out on a very difficult pitch, highlighted by 31 extras being the top scorer. Thame then also found the conditions tough – Hugh Pilkington (16) provided the strongest effort, while Ahmadzi took 6-6 to have Thame all out for just 67. This was Liam Evans‘ last game before moving to Somerset – we wish him well! The 2s slip into the relegation zone by only 2 points, and host 3rd-placed Great Brickhill 2 next week.

Thame 3rd XI took on Marsh Gibbon at Lord Williams’ School. Thame lost the toss and were asked to bat. Guy Holmes (34) once again led the way as the rest of the top order fell cheaply. At 90-9, Captain Chris ‘Winkle’ Penny (24) and Rob Tomlin came together and got Thame up to a more respectable 127. Thame managed 2 early wickets and Penny later took 2 more wickets, but a strong middle order took Marsh Gibbon home by 5 wickets in the 32nd over. The 3s travel to league-leaders Buckingham Town 3 next.

The 4th XI were away to Fringford, lost the toss and batted. On a pitch where you didn’t know whether you’d need to duck or dig one out, no matter the length, Thame could never get going. Ammar Chaudhry top-scored with 16, as Thame were all out for a hard-fought 78 in the 36th over. Fringford chose to combat the difficult pitch with attack. Trevor Spindler managed 2 wickets, including a superb 1-handed slip catch from Danny Thompson, but Thame could only manage 3 wickets in total as Fringford won quickly in the 15th over. Staying 8th, the 4s host 6th-placed Chesterton next.

Thame Women continued their title charge at home to Cookham Dean, won the toss and batted. The innings was led by a memorable 120* from 81 balls by Harshani Malan, in an unbeaten partnership of 98 with Emma Page (23). Malan blasted twenty 4s and a 6, as Thame posted an imposing 221-3 from the 30 overs. Malan then took 3 early wickets on her way to 4-14, with Bridget Cooper taking the other wicket, as Cookham fell way behind the required rate. The visitors managed to reach 137-5 at the end of their 30 overs, losing by 84 runs. That is now 6 wins from 6 for Thame Women, who are 49 points clear at the top of the table. They travel to bottom-side Oxford 2s next. 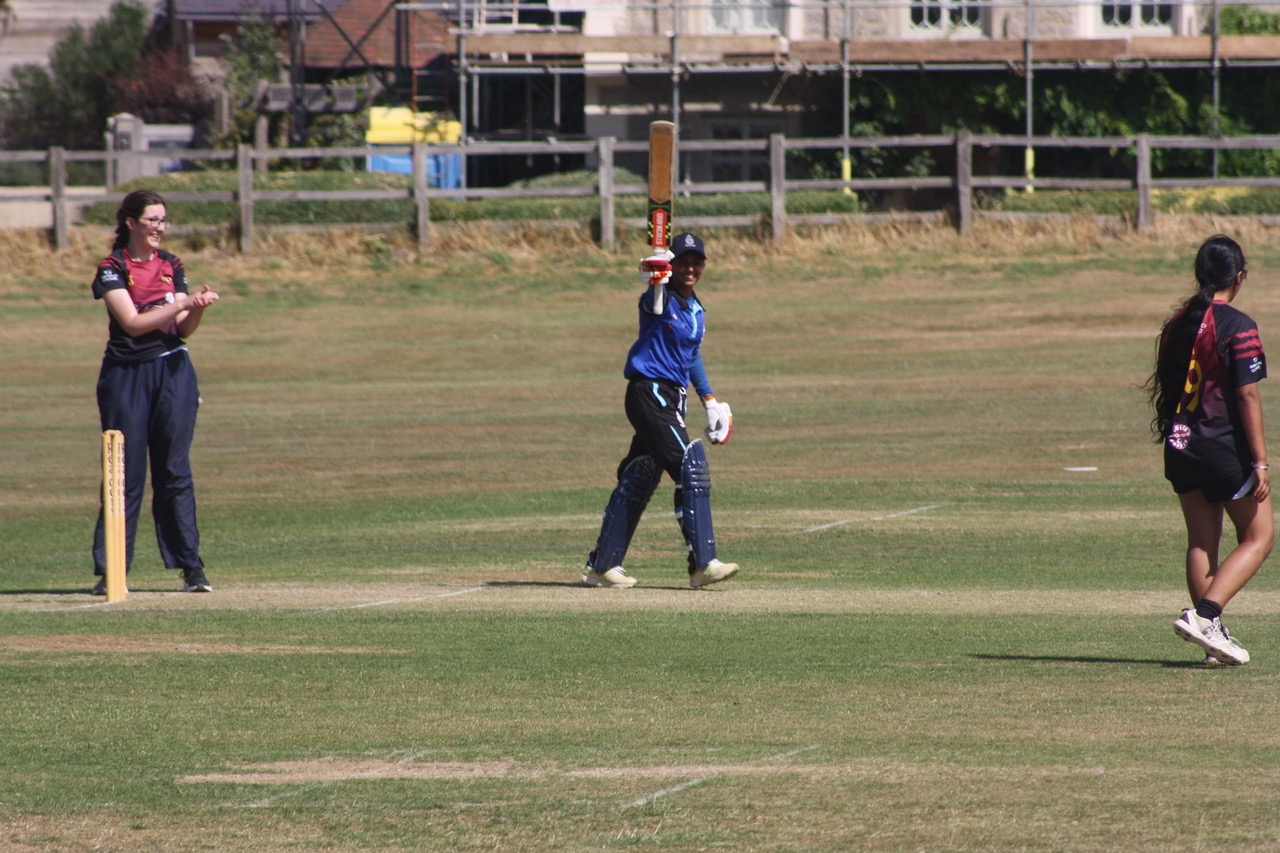 Harshani Malan scored 120* for Thame Women on Sunday, just over a week after her husband Dinny Malan scored 116* for the Men’s 1st XI