On Friday 14th July, we held our Junior Awards Evening at the club, celebrating an overall successful season for our Youth sides. Players and their families were in attendance and our overseas professional, Gamindu Kanishka, was on hand to give out the awards to the well-deserved recipients, who he has been coaching throughout the season. Well done to all the boys and girls for their fantastic efforts this season! Pictures of the award winners and a few words from the coaches can be found below. 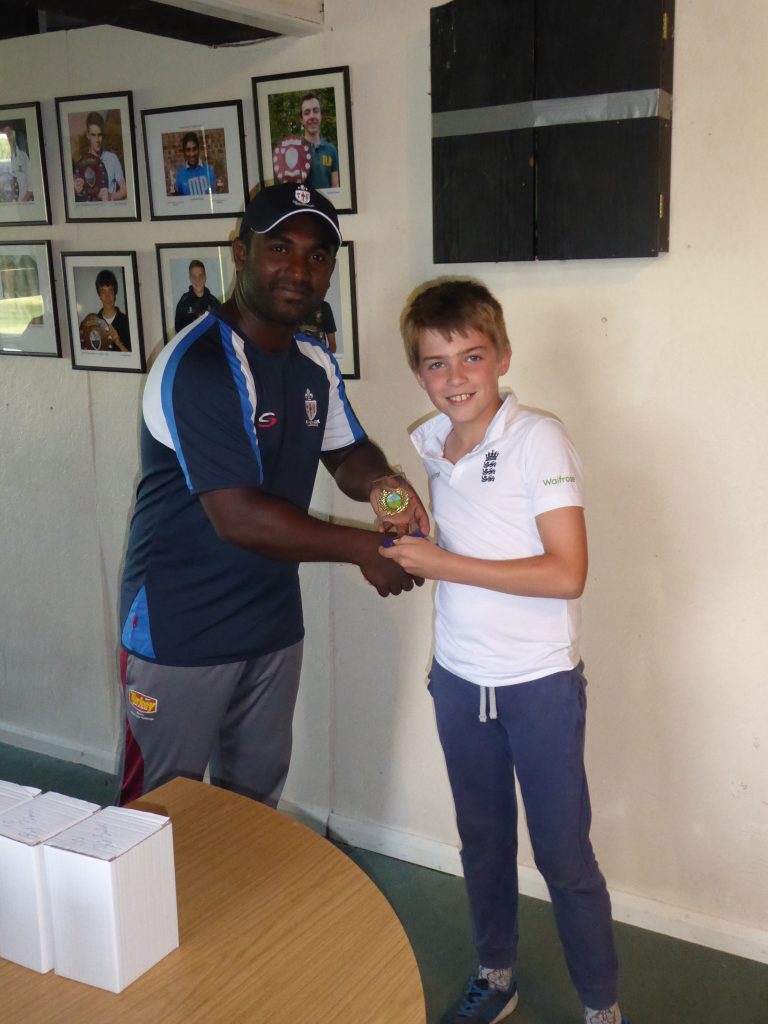 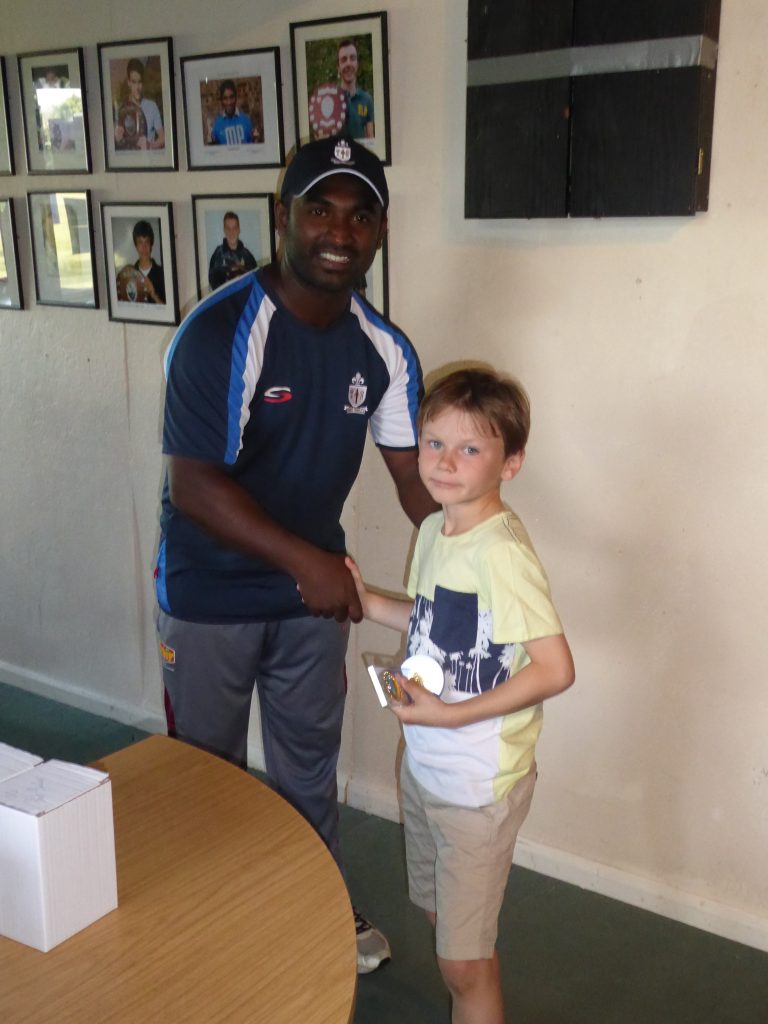 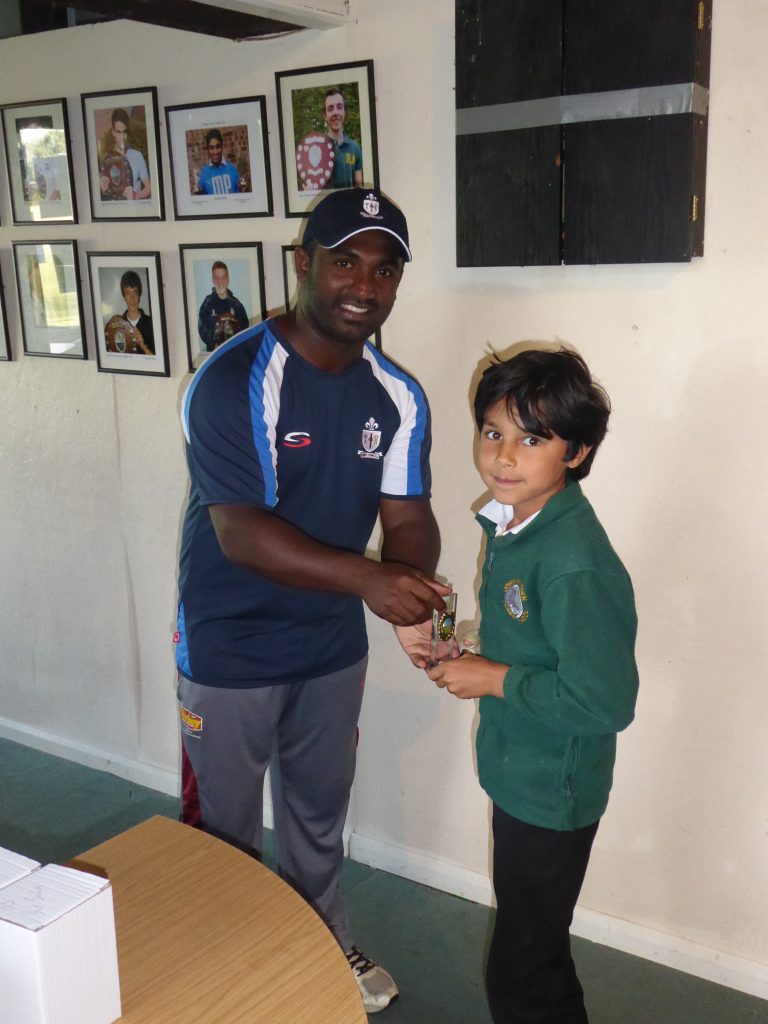 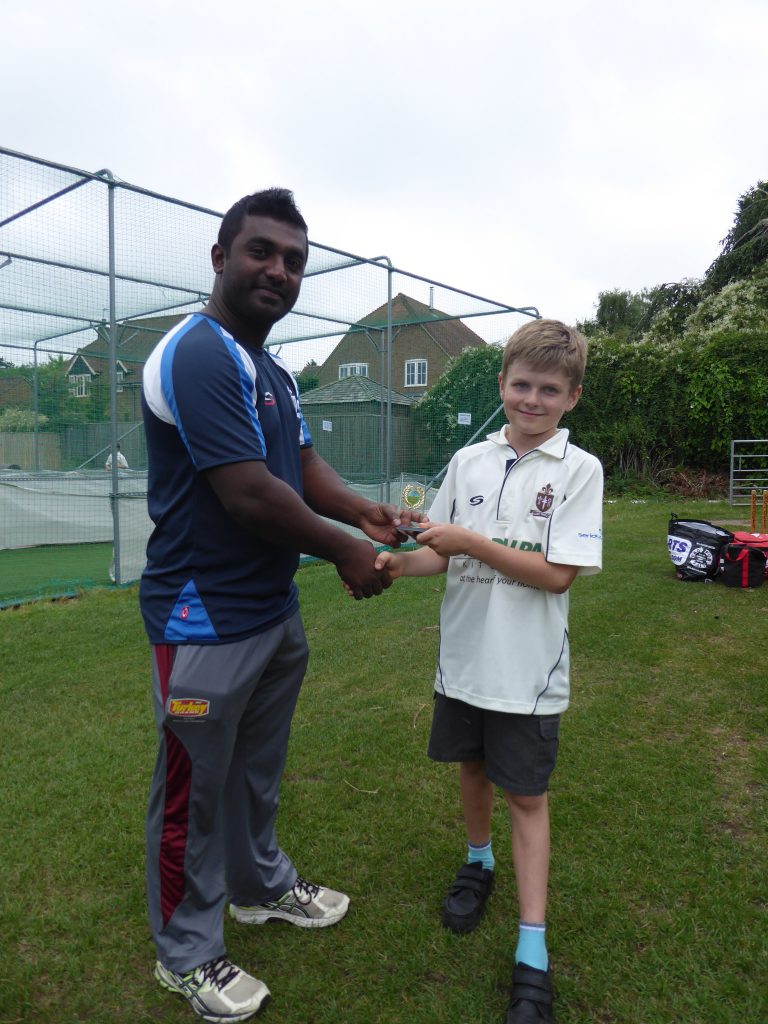 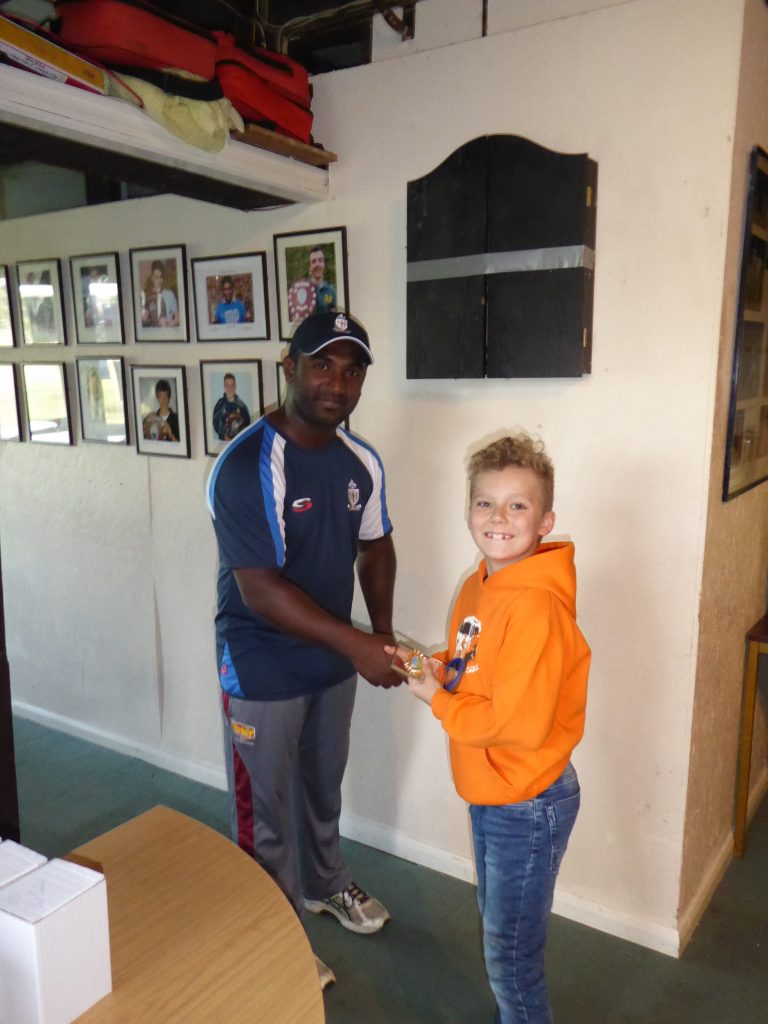 “The Club’s Under-9’s have had a very good season, playing in both the Oxfordshire and Aylesbury mid-week leagues. The team only lost two matches, against Tiddington and unluckily against Stewkley Vicarage.

With over 40 boys and girls to select from, manager/coach Angus Lachlan kept a core of experienced players in the match squads, and rotated the rest of the players to give them a first taste of competitive cricket. All the games were keenly played, in a good spirit. Thanks go to Paddy Harris and our other volunteer coaches who have produced a strong crop of young cricketers to play in our representative matches.

The team was captained by George Greaves who had an excellent season with ball and bat, and fully justified his District selection. Thomas Bailey also captained the side in a couple of matches. Other players who are having a good 2017 are Alex Tervet, with both bat and ball and occasional wicket keeping, William McFarlane, Felix Ward, and Sam Gibson-Harris. We also welcomed very promising new players in Alexander Leigh, Toby Borgnis, and Under-11 girls Daisy Ward, Judy Wu and Amber Cattell. From the coaches’ point of view, it was also very rewarding to see the improvement made over last year by several players, notably Daniel Tervet, Jacob Bekker and Noah Harris, all who are developing into very good young cricketers.” – Angus Lachlan, Under 9s Coach 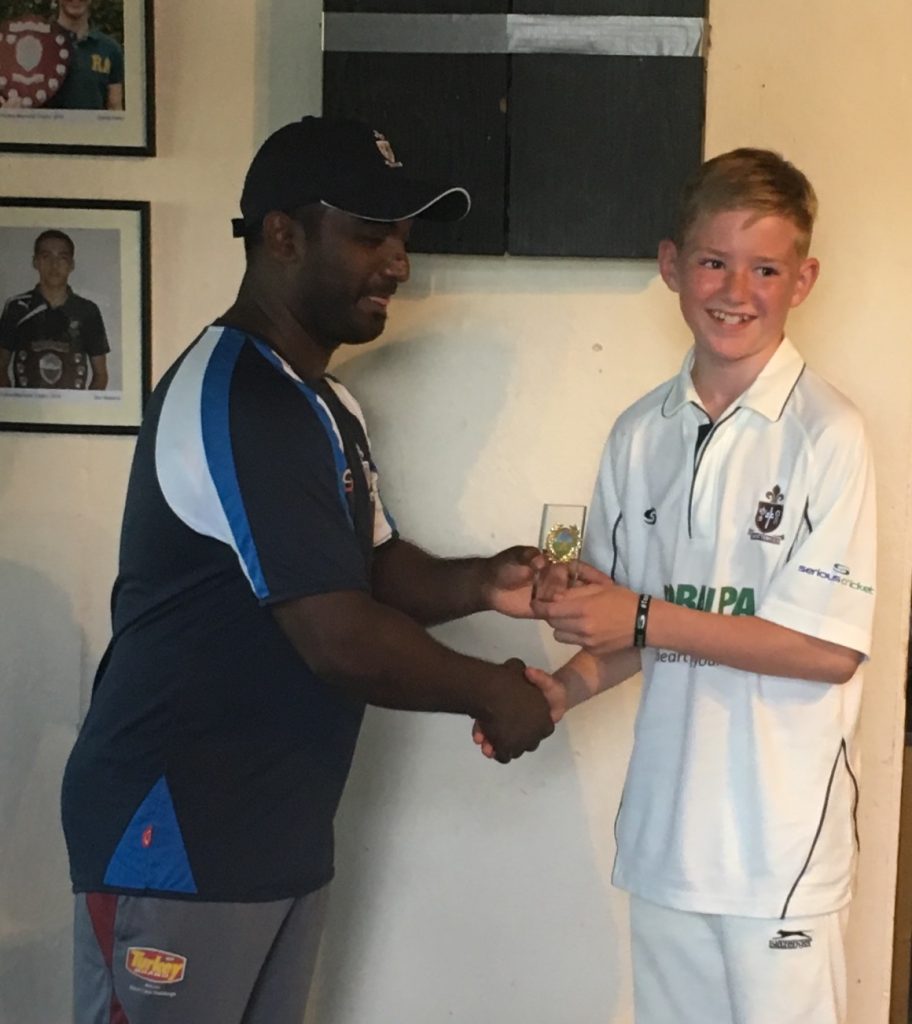 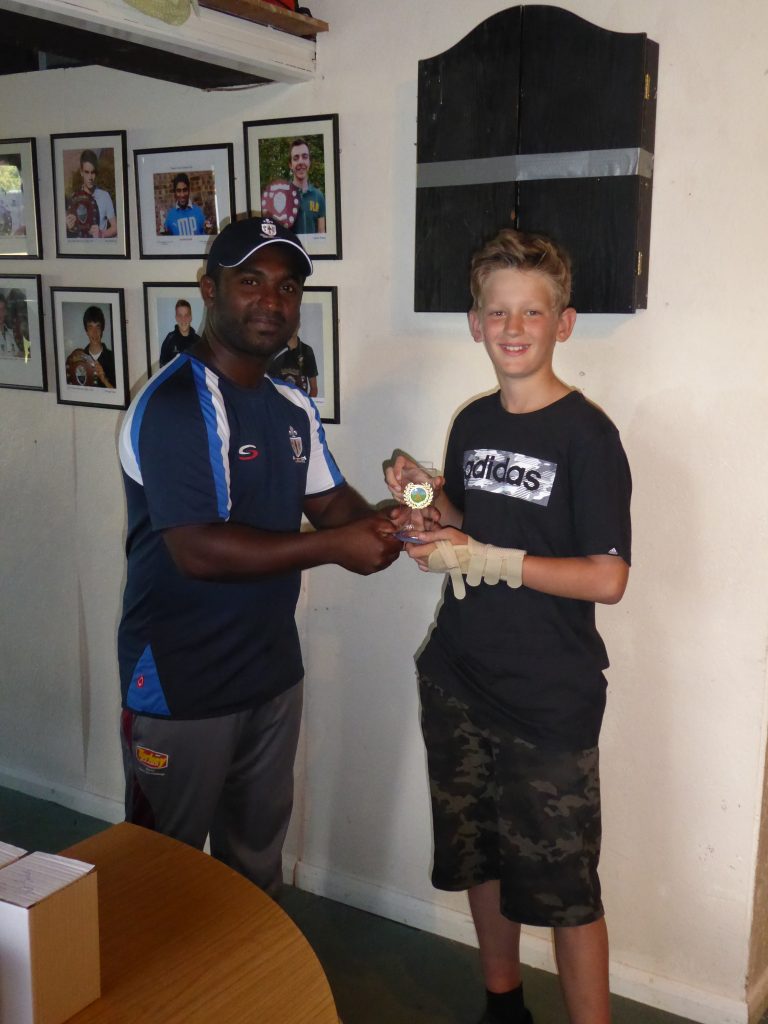 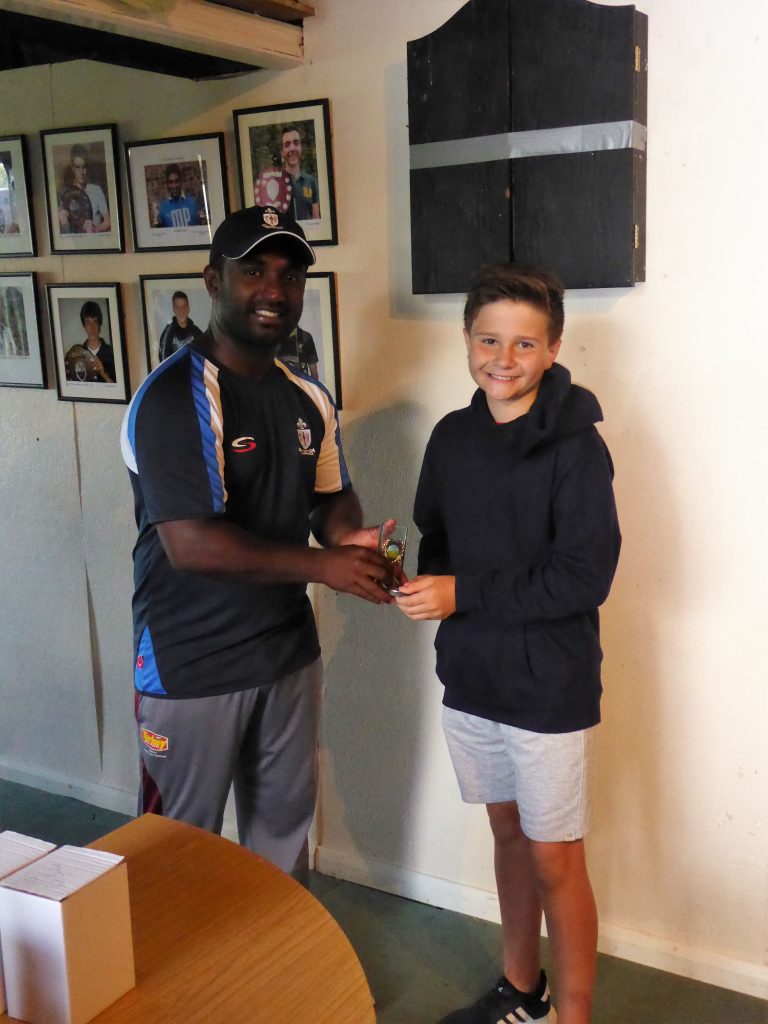 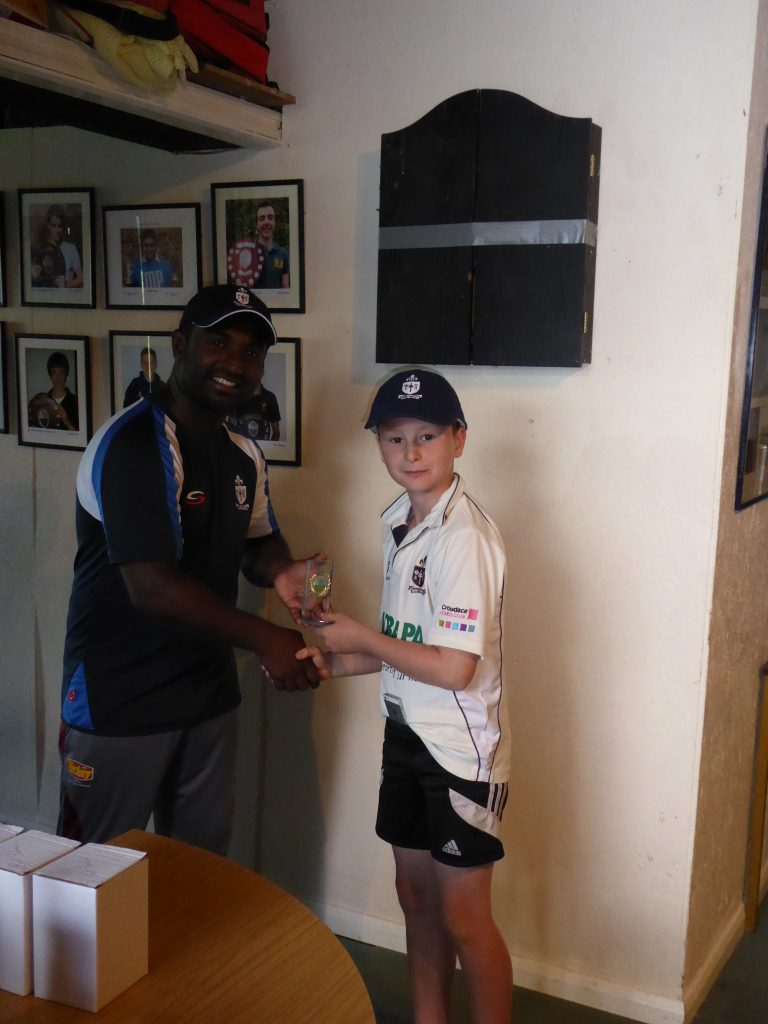 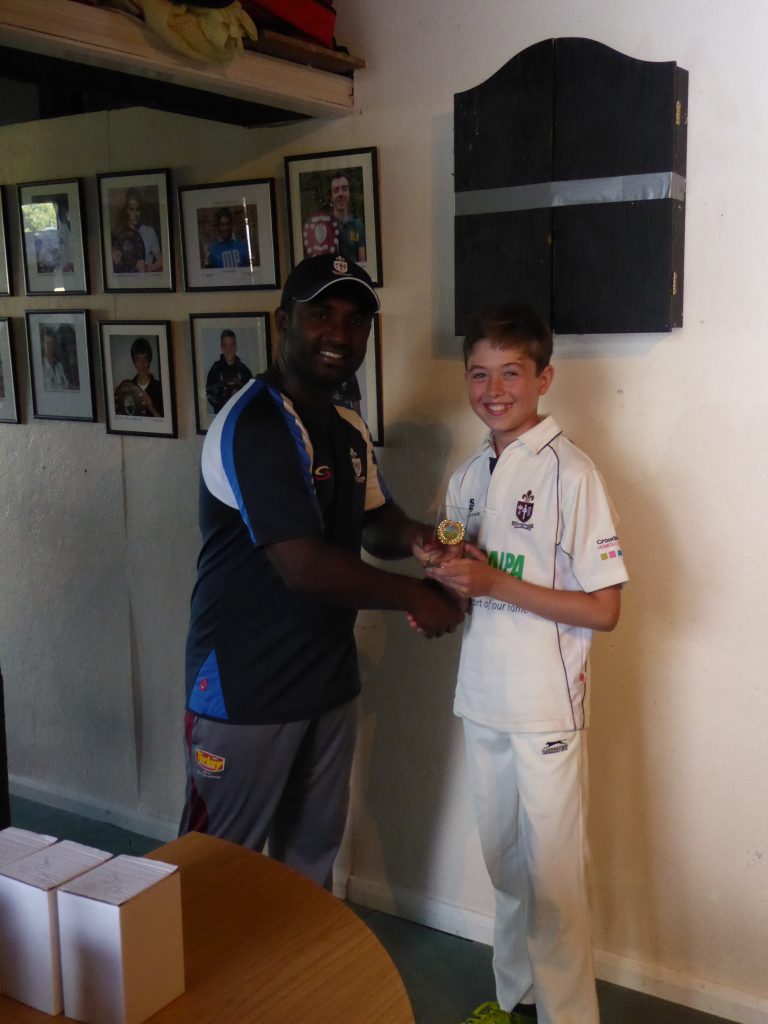 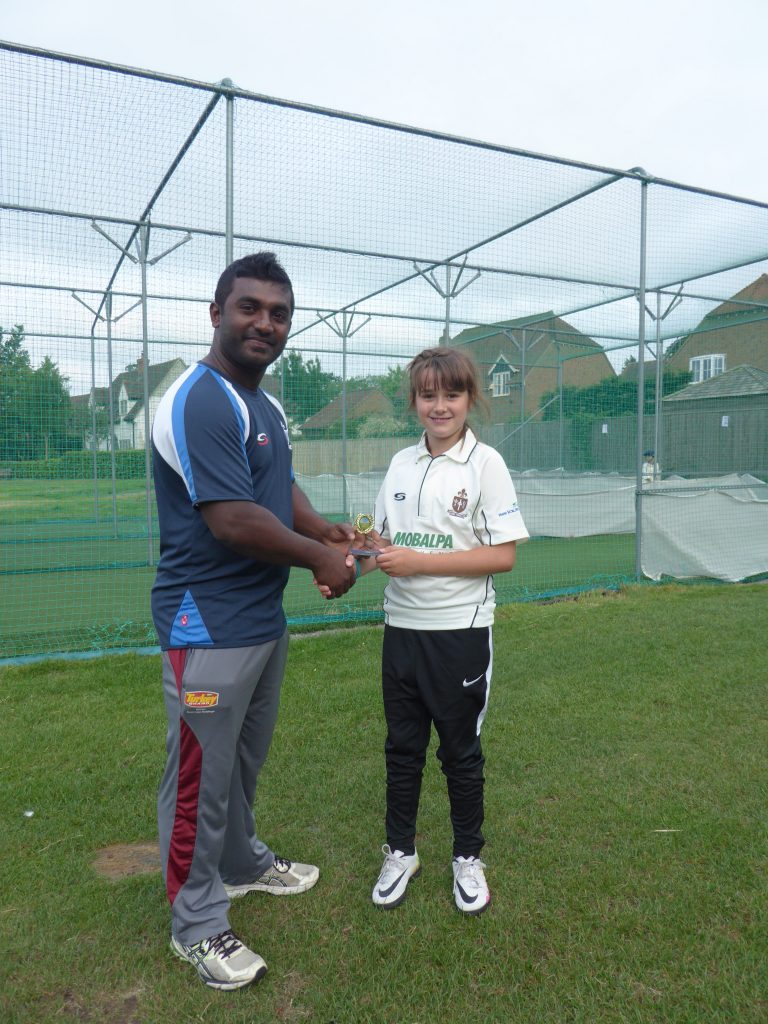 Special award to Matthew Cayley for his hat-trick vs Tiddington 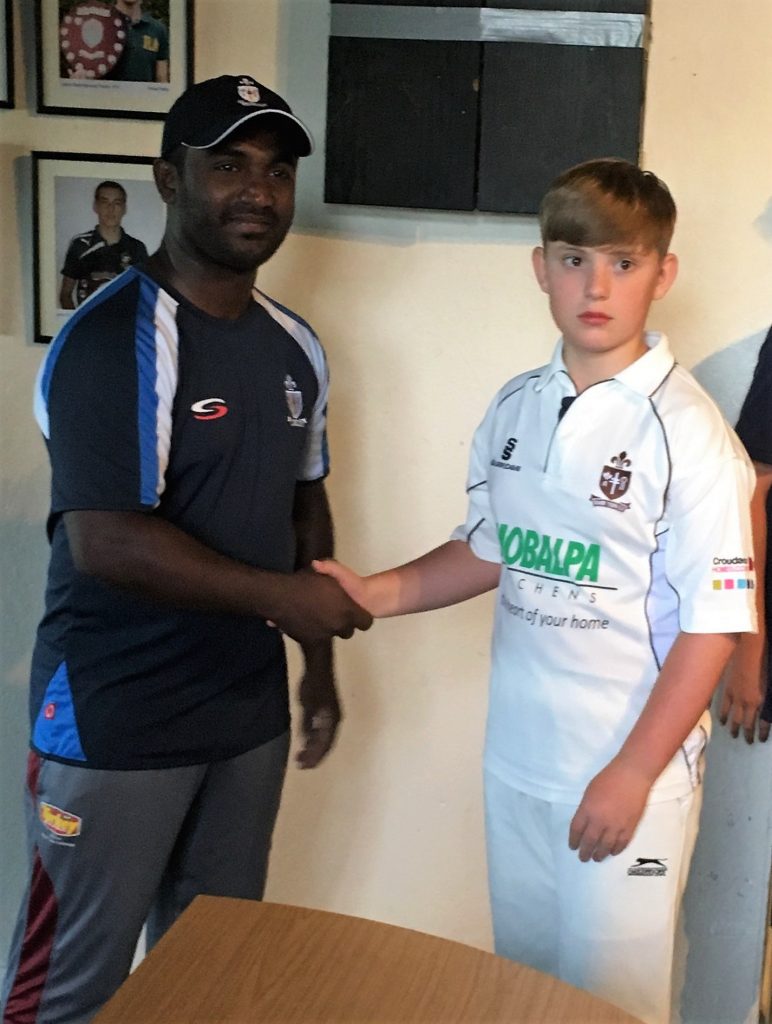 “With the squad strengthened by several new recruits, and with most of the group another year older (Year 6), prospects at the start of the season looked good. However, no-one dared contemplate reaching the Finals Day at that early stage. But after 4 weeks of matches, with captain Luke Hayes and vice-captain Mack Copley in the lead, Thame were unbeaten, after a close game at Aston Rowant, easy wins against MP Academy and Oxford and, the highlight, an exciting home win against Horspath. The half-term friendly win over Dinton started the 6-week run-in to the end of the season, with easy return wins over MP Academy and Oxford, two wins over Tiddington and the one, heavy defeat away to Horspath.

Thame had won their group, thanks to the fine calculations of percentage win rates and were heading to the County Finals Day at Great & Little Tew CC on July 16th. Despite cloudy weather and the occasional drizzle, the Finals Day was undoubtedly the highlight for the lucky 12 that travelled to G&LTCC. In the semi-final against the hosts, Thame came unstuck against good opening bowlers and only Huxley Davis showed the resolve and technique to weather that particular storm. In the 3rd/4th place playoff after lunch, however, it was a different story. Luke Hayes bowled wicket-to-wicket and bowled 3 of the Peppard Stoke Row (PSR) batsmen for ducks (he took 6 wickets in the day) and Thame had to chase down 104 to win. Theo Ransby (25) held the innings together and Daniel Laws hit out bravely for 22. At the start of the last over, Thame needed 6 to win and 5 to tie. Bertie Heyes hit the first ball for 4 and the win looked secure. Four good balls followed, however, but no runs so it all came down to the last ball – no pressure ! Bertie then hit the last ball square of the wicket, he and Theo ran the first and turned for what would have been the match-winner but Theo was run out – match tied on 104! Honours shared with PSR, but in the end, the 2 sides were separated by the fact that Thame lost two more wickets in the run chase. So Thame finished 4th out of 28 clubs that started the season the the Under-11 competition. An excellent reward for 12 weeks of hard work and training” – Andy Jinman, Under 11s Coach

Note – the Under-11 season will continue until August 17th and the full set of their results can be found here. 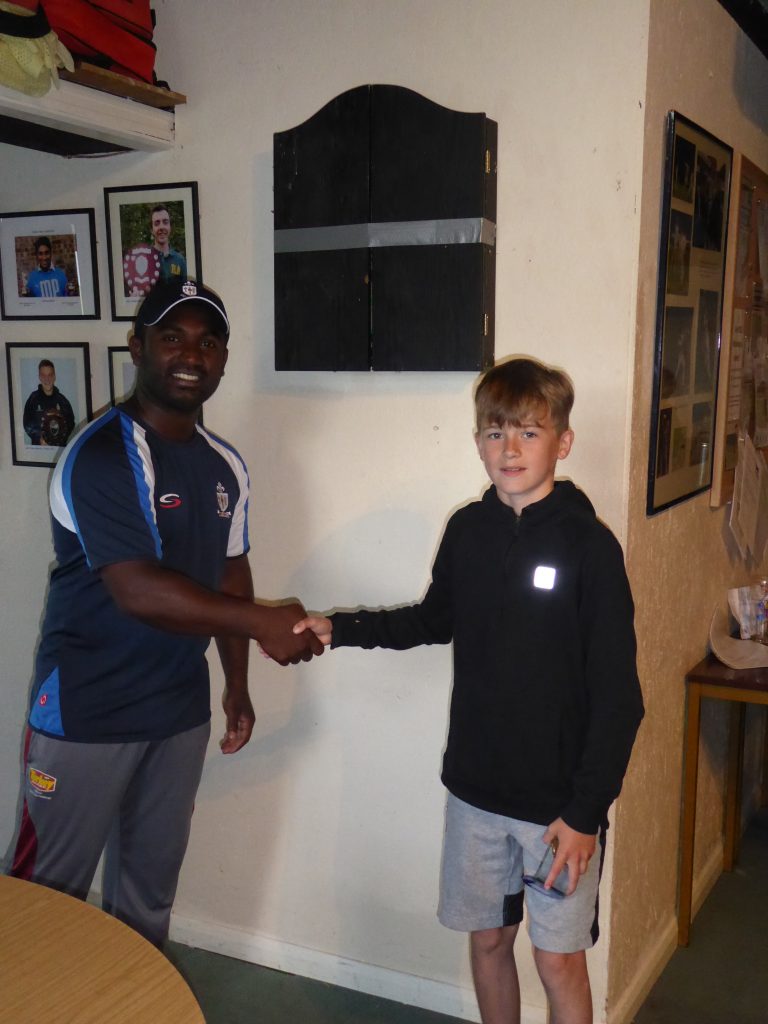 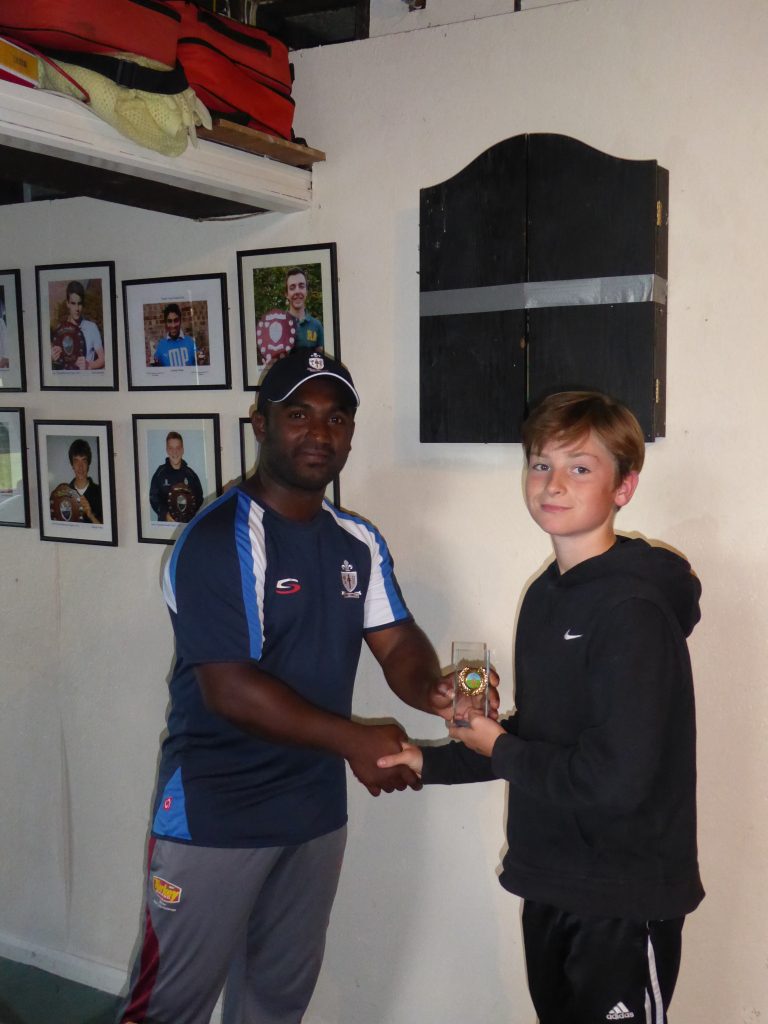 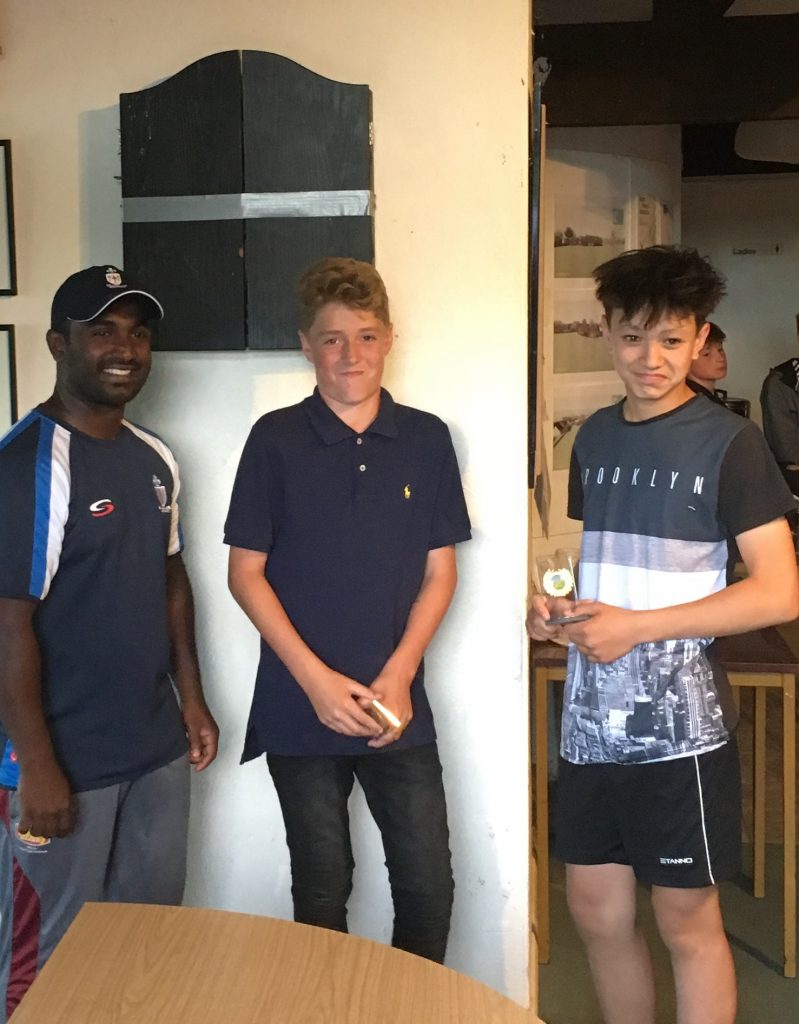 “The U13 side enjoyed a strong season and finished up with a record of played 12, won 6, lost 6. Having entered two leagues, we were able to give all registered players game time and this certainly showed in the progression of all of the individuals made during the season. Highlights were the league double over MP Sports and a thrilling last ball win over Aston Rowant.” – Richard Carr, Under 13s Coach